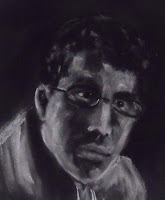 The master was growing old, and yet he still rose early and each day he was to be seen in the garden doing his share of the toils. The students thought that he was getting far too old to be doing this. They spoke to him often about taking things easy; each time the answer was the same. “I am well able to do my share. I am alive and a new day waits.”


One day the students decided to hide his tools. That evening at dinner he did not eat. The next day it was the same, and the next. The next morning the students returned his tools and he worked. That night he was seen enjoying his dinner.

It was a windy day many years ago when my son and I went to sail in the small boat I had bought from my “not smoking money.” We were both beginners and probably foolhardy.

We were well out in the middle of the loch when we capsized. Before we were aware what was happening we were under the boat, with a pocket of air. My son was caught in the ropes. I managed to get out but could not turn the boat upright. There was no sign of anybody, we were alone. I went back beside him. He said to me, “Dad are we going to die?” “No,” I said with all the gusto I could muster.

I was not so sure that this was the case. Some forty minutes later the rescue boat arrived, and with their help we managed to right the boat and reach the shore.

It is only when you are aware of your fragility that you that each moment of each day becomes the most precious treasure.

So step bravely, today is a new day and like the master you have much to do.

This blog is linked to my other where I speak of the artwork used:- Ross
Posted by Ralph at 08:02