A Few Things I Should Know. 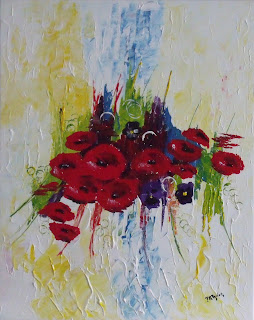 Poppy Abstract.
I am always in a great rush. I have been all of my life a person who burns energy like it was going out of fashion. I was giving this some thought this morning as I began to prepare myself for a week of running in the mountains. I love these days but I am also conscious of the fact of the raised level of danger from the normal daily running I do here at home.
I run in the mornings and walk in the afternoon/early evening then fall into bed exhausted to be ready for the next day.  I became very aware of this after reading the blog of Sherry, Conservatively Bohemian.  So I sat down and gave thought, here is the bones of my time of thinking, of what stops me being all I want to be and the artist I dream of being.
I think the first thing is this rushing and trying to fit things into something else I am doing. I plan a walk and set out. During the course of the walk I take out my watercolour box and do a painting, but all the time my mind is on the clock and the time I have yet to walk. The end result is a bad walk and a bad painting. I need to learn that when walking I am walking and when painting I am painting. I need to schedule if I want to do both.
Next. If we continue to repeat a story in our head, we eventually believe that story and embrace it – whether it empowers us or not.  So the question is: Does my story empower me?  Do I place my mistakes in my mind; where their weight may crush my current potential.  Instead, I must place them under my feet and use them as a platform to view the horizon.  I must remember, all things are difficult before they are easy.  What matters the most is what I am starting to do now.
I also need to stop  being  s hard on myself.  There are plenty of people willing to do that for me. I need to do my  best and surrender the rest.  Tell my self, “I am doing the best I can with what I have in this moment.  And that is all I can expect of anyone, including me.”  I need to be proud of everything that I do, even the  mistakes.  Because even mistakes mean I am trying.
Lastly; stop waiting for tomorrow; I will never get today back.  It doesn’t matter what I’ve done in the past.  It doesn’t matter how low or unworthy I feel right now.  The simple fact is that I am alive and that makes me worthy.  Life is too short for excuses.   I have to; Stop settling.  Stop procrastinating.  Start today by taking one courageous step forward.  If I am not sure exactly which way to go, it is always wise to follow my heart.
This blog is linked to my blog  Poppy Abstract
Posted by Ralph at 12:32 10 comments:

A Drop of Water.

Floral Abstract.
We have just taken delivery of a further two bins in our armoury of rubbish (garbage) disposal system. What used to the  bin we used for paper and cardboard has now become the landfill bin, half the size of the original landfill bin. We have been given a new bin for plastic and metal cans. The bin we had for garden refuse now takes food waste from the kitchen and we have a little kitchen waste bin in which to collect it.
If nothing else this new regime has caused much discussion. “What are we gonna dae wi ah thae bins.” I do not have time to sort out all that stuff before putting it in separate bins.” “When that landfill bin is full I will just take the rest down the road and dump it.” These are some of the negative responses. I have tried to embrace the new regime
and do as best I can to keep the waste going to landfill sites to a minimum.
Sometimes the debating gets to a wider level. Which country per person produces the most waste? If every country created as much how long could we survive?
As part of my teaching material and examination papers I prepared for Scottish schools, the environment was one of my topics, so I am loving the raised interest in the whole subject.
Here is an interesting thought for all those who say they do not care, or have given it little thought. Those who say the planet will survive. I am 100% sure the planet will survive, it always has. But it has evolved in its survival and if we continue to act as we do in our concern for it, it may survive but by leaving humanity out of the process.
A Zen master named Gisan asked a young student to bring him a pail of water to cool his bath.
The student brought the water and, after cooling the bath, threw on to the ground the little that was left over.
“You dunce!” the master scolded him. “Why didn’t you give the rest of the water to the plants? What right have you to waste even a drop of water in this temple?”
The young student attained Zen in that instant. He changed his name to Tekisui, which means a drop of water.
We who paint because we are inspired by the beauty of nature should hold our concern for the planet like a feather in the palm of our hands.
This is the way of Tao.
This blog is linked to my other. Floral Abstract.
Posted by Ralph at 14:28 6 comments: