The Moments That Make Dreams 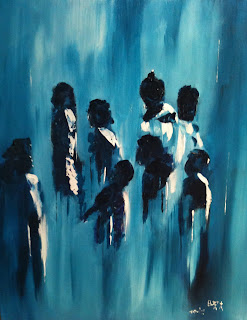 The Moments That Make Dreams
There are days when you open you just realise how fortunate you are. When things just go well, or you realise how much you are blessed with good friends. For the artist these days are often linked closely to how the art is progressing. I began to realise this yesterday when I read the email I received from a friend. The email was saying that the person had not really realised how well off they were. It went something like this.
I am so rich, Silver in the Hair, Gold in the teeth. Crystals in the kidneys and sugar in the blood. Lead in the ass and iron in the arteries, and an inexhaustible supply of natural gas. I never thought I could accumulate such wealth.
Anyway back to the serious stuff of yesterday. I was looking at  some pictures of marathons I had run. As I looked I noticed this group of people standing behind the finish line. They were not looking at the finishers. I started to ask myself, what are they saying, what are they thinking and doing. As I thought a picture came to my mind.
I had already started working on a canvas board but was very unhappy with the progress I was making and had washed it off. I went back to the task with my mind now full of new thoughts. Using Platho Blue and White I painted what I could see clearly in my mind.
What appeared on the canvas board was not exactly what I had in my eye but it was very close. I had only used the two colours and I felt it was ok. I took a picture of it while it was still wet. I put a copy of it on Art Wanted and I posted it on my FaceBook page.
Within minutes of it appearing on Facebook I had been made a solid offer for the work. Obviously a person who knows just what they like. This person now owns two of my works. The first was purchased two years ago but I can see the similarities of thought in both works and I feel sure they will fit in the same home.
I was feeling pleased and to add the sugar to the icing I got an email just ten minutes later saying somebody had made my painting a pic of the day.
I never knew I was so rich as the story above says.
Hope you are all well.
Posted by Ralph at 09:56 8 comments: 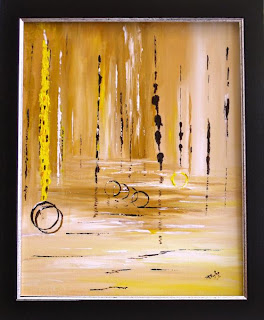 I Remember Summer Days.
It is sometime now since I posted on this blog. There are a number of reasons for this. First it was a hectic summer with the running and walking and the plot. I just never seemed to have much in the way of time at all.

Now when I have a bit more time, I have picked up some illness that is causing me a great deal of discomfort and so sitting at the computer is not what I really want to be about. I apologise to those, like Jerry, who followed my blog regularly. I will be back as soon as I get to the bottom of the discomfort, hopefully.

In the meantime I have been posting new art and keeping people posted about my ongoing sales of art, which never ever fails to move me. There is indeed something wonderful about people buying and hanging your art. The very thought that I might continue to give pleasure to others after I and the earth beneath me have parted company gives much pleasure.

Pleas keep in touch and if you have a moment please look to my other blog.

I have added above my latest attempt at art.
Posted by Ralph at 08:41 5 comments: