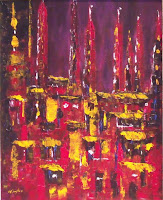 I remember it well, the night I had with friends in Edinburgh. It was one of those nights where everybody had fun. It was a Saturday so we had plenty time to catch the last train home. We all piled into the carriage still laughing and joking. The next thing I remember was wakening up in the carriage alone. I looked out the window to see that the train had arrived at its destination, Cupar. Now this was the other side of Fife and a long way from where I wanted to be. There were no trains due to return until the next morning. My first thought was to just stay on the platform but the station manager was having none of that.


Next thought let me see if I can hitch a lift home. I arrived home in the very early hours of the morning. I had enough time to get a shower and head off out to my work. Thank goodness it was not a weekday and we only did a short period of work.

It was with relief that I, a few hours later crawled back into bed. My friends had thought it would be a laugh to just let me sleep. They had all go off at the correct station.

Now I could have reacted in a number of ways, anger, I could have gone off in a huff or I could have just gone along with it. I chose the latter and I have had tears of telling the story and retelling it. Here I am telling it again.

Yesterday, on the Canadian news, I am told there was a story of a woman who had fallen asleep on an airplane. Nobody had noticed her so when she awoke she could not get off the plane. Eventually the police arrived armed with guns to escort her from the plane.

She is now going to sue the company for, neglect, stress and wrongful arrest. My, how times have changed. It seems that now we do not just want to have the tales to tell round the dinner table, we want the meals paid for also.

There is an old Chinese account of a certain temple. Way back in history the master had destroyed some sacred texts. He believed his students were becoming attached to the manuscripts and not the teachings.

Later, after his death a statue of the teacher was erected. There grew up a tradition that rather than bowing to the statue some people would gently spit towards it. One day a great master entered and bowed low before the statue. When asked why he bowed rather than spit he replied. “If you wish to spit, then you spit. I prefer to bow, so I will bow.”

It is all about choices once again. The way of Tao is full of choices.

This blog is linked to my other where the art is discussed.   Remember the Night We Painted the Town Red
Posted by Ralph at 08:14