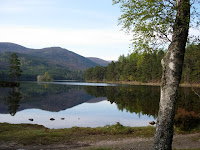 When I was a young lad my father took me walking every Sunday. He was not a believer in god, or for that matter religion. So Sunday became a special day for me, because that was the day I walked with my father. It seemed we walked for mile after mile. I now realise it only seemed that. One thing for sure, it was a learning experience.


He identified the different trees, the habits of birds and animals and the different flowers and their characters. In the midst of all this adventure he also taught me right from wrong. He pointed out dangers and things to be aware of. He did it gently with few words.

The other day there I was out walking. I was going along the path of the beautiful, Loch an Eilean. There is only wall small steading on this path, where there lives an old man and his dog. Electricity is fed to the home by a cable, high among the trees, on poles. It would be almost invisible if it were not for the large unsightly yellow warning notices on every tree. Not one on one pole but three on each. It is as if we cannot be told once. It spoils a beautiful area. I suppose it is part of the culture of health and safety, and the culture of blame. Have we lost the art of knowing right from wrong?

The master was running a summer meditation class for young people. Many gathered for the three week course. On the second day, a boy was seen by another stealing. The matter was reported to the master. It seemed he did nothing.

Two days later the same thing happened again. This time the other young people told the master, “If you do not send him home, we are all leaving.”

The master gathered all the students in the meditation room. He repeated to all the gathered what had happened. He then surprised them by saying, “If you choose to go home, then so be it. This young man here has not yet learned right from wrong. He more than all of you is in need of my help. If I do not help then how will he ever learn right from wrong?”

The young man was so moved he broke down in tears. From that day on he never stole again. He had his first lesson in the difference between right and wrong. He also learned the value of trust.


The picture above is a view of Loch an Eilean there is a path wanders all the way round. When I was running seriously I would run from the caravan site and round this path then back to the site a run of 10 miles. The other day I walked it savouring the beauty.

I have another blog where I discuss an artwork:-The Incoming Tide
Posted by Ralph at 08:03