If I Give You 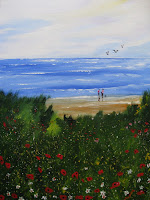 I will get back to that title I promise you. Yesterday I spent some quality time with my daughter at the Edinburgh Book Festival. We do this every year at this time, we select a few authors we would like to go and listen to, then decide how we will fill the rest of the day around it. Yesterday we were going to listen to only one author, so we also visited the National Art Gallery together. Between the two we had a nice ale and a meal.


While we were sitting together enjoying the food and the ale we were also trying to discuss the exhibition we had attended. The trouble was I could not concentrate. Sitting at the table behind me were three young ladies in full flight of conversation. They were speaking loudly so it was almost impossible to ignore them. There is nothing worse than hearing every word of a conversation and not understanding a thing said. No, they were not visitors from overseas, but they could have been for all I understood.

Let me explain by sharing a quick little story.

A teacher was walking along a corridor of the school and noticed a student walking towards her. She knew this pupil should be in a class and that the girl was renowned for skipping classes. She asked her, “What class are you skipping this time?”

"It is the English class, isn't it?" replied the teacher.

The dying art of communication! But it is not always one way. Sometimes we older people assume what we say is straightforward.

A teacher said to a young student called Patrick, “If I give you two rabbits, then give you another two, and then another two. How many rabbits do you have?”

“Let’s try that again.” says the teacher. “If I give you two rabbits, then give you another two, and then another two. How many rabbits do you have?”

“Let me try something else,” says the teacher. “If I give you two apples, then give you another two, and then another two. How many apples do you have?”

“Good, “says the teacher. Now let us try again. “If I give you two rabbits, then give you another two, and then another two. How many rabbits do you have?”

“How on earth do you work that out, that three lots of two rabbits equal seven? asked the frustrated teacher.

“Well then,” says Patrick, “Ill already be having a rabbit at home.”

The speaker at the book festival was a marvellous communicator but I will not be telling many of his tales on this blog.

May the word go with you today.

This blog is linked to my other where I discuss the artwork used. The Meeting
Posted by Ralph at 09:33