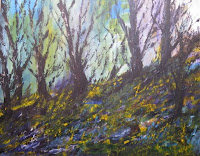 Yesterday I visited the art gallery where they were showing an exhibition of impressionist garden paintings. It was overwhelming. So many of the masters in one place, almost too much for the mind to comprehend in one moment.


I was so engrossed in three of Monet’s Water Lilly paintings that I forgot I was alone. I said to the lady standing next to me, “I find these paintings just flood my mind with feelings.” Then I remembered where I was and was about to apologise. She turned and said to me, “Thank you for saying that I was just bursting to say that to somebody but was so aware of being alone.”

We spoke together about one or two others and then we went our separate ways. As she was about to leave I thanked her for her comments. She said I had made her day and I think we both left feeling touched by the art and the joy of sharing.

It is amazing how easy it is to be uplifted by another and in turn uplift. I have a moving story to share with you.

There was a little boy who lived in an orphanage. He was one of the youngest and often felt alone. He used to sit at the window and watch the birds. How he longed to be able to fly. He spoke of it often. “Why cant I fly like the birds?”

Next to the orphanage was a park where he was allowed to go and play. He was so often alone playing in the sandpit. One day there was another lad about his age sitting in the sand. They talked to each other and made castles and magical places. They laughed and joked for what seemed like ages.

Time came when it was time to leave. The father of the other lad went behind the park bench and wheeled over a wheelchair. The lad who wanted to fly had not been aware of his new friends disability.

He went over to the father and spoke to him. He returned to the lad and said, “I cannot help you to walk or run but I can do something. The father lifted his son onto the orphans back and laughed as they ran round the park.

Tears rolled down his cheeks as he laughed at the words of his son. Sitting on his new friends back he waved his arms and shouted loudly. “Look Daddy. I can fly, I can fly.”


I noticed that somebody left my followers yesterday apologies if I am offending or being too heavy.

This blog is linked to my other where I discuss the art.  Thoughts of Spring
Posted by Ralph at 08:30