I Am Alive and it is a Good Day 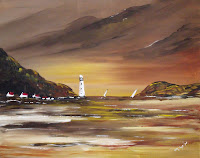 I have said many times that we have to continually make choices in life and the choices we make effect everything that follows. I have also said more than once that we should always be making positive choices. I was asked a very interesting question yesterday while talking to somebody about this very subject. It had all begun when the person looked at the artwork I have included today. More of that elsewhere on my other blog.


One way or another, the two people I was chatting to were sure, that there were many situations in which it was impossible to be positive. One of the two has been unemployed for some length of time. He said that it was impossible to stay positive in such a situation. He has applied for many jobs and keeps getting letters telling him his application has been unsuccessful. How can you be positive? I am aware that there are for all of us difficult times life is such that it is impossible to go through it without.

The truth is still the same, making positive choices each day are the way to face all things. This brings me to a true story.

A friend owned a restaurant which was always very busy. More than that he had kept the same staff with one or two small changes for most of the years he had the restaurant. He was a very positive thinking person and he always taught his staff to be the same. The result was that the customers attended not only for the food. They came because they knew they would leave feeling well fed and feeling good about themselves.

He heard me say one day that I had been invited to feel miserable but I had refused the invitation, and today was, as Jerry keeps on saying, a good day. He took this saying on board and I heard him share it with customers often.

It is all about choices and I will not be moved from that spot.

To continue with the story about the restaurant owner. There was one night just after closing time. He and one of the other members of staff were doing a final check of the takings and getting it ready for banking. Two men broke in through the back door brandishing guns. The female member of staff was terrified and reacted. It seems the men though she was going to press an alarm or something and they panicked. A shot was fired as they ran for the door. The owner was hit in the chest.

One of the nurses asked him if he was allergic to anything. He said that he was. There was a moment of silence and a doctor asked what. He said he was allergic to bullets. he then went on to say I am choosing to live though so please treat me like a man alive not a dead man.

He still has his restaurant and all his staff are still working for him. Each day he chooses to have a good day.

I hope you have a great day today.

This blog is linked to my other.  Lead Kindly Light
Posted by Ralph at 08:20