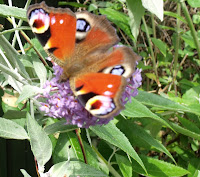 Thanks to all who left kind words and thoughts, over the last two days. Yesterday ended up to be a beautiful day with the sun shinning all day long, the first day this week this has been the case. We had our meal outside in the garden surrounded by the butterflies.


It had been agreed that the day would be kept light. When my family get together the conversations tend to get deep and heavy. So not much food for thinking about todays blog.

So I go deep into my thoughts this morning to think of one of my favourite stories. Strangely this little tale with the title heaven and hell never actually makes me think of those two things at all rather they make me think of my actions and the way I respond to the aggression of others.

The old monk sat by the side of the road. With his eyes closed, his legs crossed and his hands folded in his lap, he sat. In deep meditation, he sat.

Suddenly his zazen was interrupted by the harsh and demanding voice of a samurai warrior. "Old man! Teach me about heaven and hell!"

At first, as though he had not heard, there was no perceptible response from the monk. But gradually he began to open his eyes, the faintest hint of a smile playing around the corners of his mouth as the samurai stood there, waiting impatiently, growing more and more agitated with each passing second.

The samurai uttered a vile curse. He drew his sword and raised it high above his head. His face turned to crimson and the veins on his neck stood out in bold relief as he prepared to sever the monk's head from its shoulders.

"That is hell," said the old monk gently, just as the sword began its descent. In that fraction of a second, the samurai was overcome with amazement, awe, compassion and love for this gentle being who had dared to risk his very life to give him such a teaching. He stopped his sword in mid-flight and his eyes filled with grateful tears.