A Job Half Done and a Story Half Told 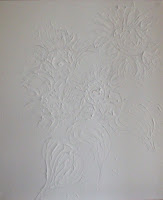 I knew the minute I did it I should not have, talked about my dear old Gran I mean. She was in my mind for the rest of the day. The things we did together and the sayings she had.


Another favourite of hers was this one, “Fools and bairns should never see a job half done.” I will come back to that saying again on my other blog, because I do hope you have noticed that the artwork on here today is not in fact a painting, but a half finished one.

It is like something else that happened yesterday. My wife never tells me jokes, for two reasons. One she often does not see the funny in the punch line, or she has forgotten the ending. So it was with great surprise I heard her say she had a joke to tell me. We were out walking at the time. An hour later I had heard the beginning of the joke but she had forgotten the ending. Now how frustrating is that.

I spent a lot of time later trying to work out what the ending to that joke could be.

A physics teacher said to his class, “Isaac Newton was sitting under a tree when an apple fell on his head and he discovered gravity. Is that not just wonderful?

Now if I stopped there you would have a couple of sentences giving some information you have probably heard a million times before. If I go on to tell you the response of one of his students I hope you feel the need to smile.

The student said, “Yes sir, if he had been sitting in class like us reading books, he would never have discovered anything.”

Or to put it another way, with another little tale.

When the boss appeared she jumps up and hangs upside down from the ceiling. The boss of course asks her what she is doing. She tells him she is a light bulb.

The boss looks all concerned and tells her she has been working far too hard to go home and have a days rest.

The man then takes off his overalls and begins to put on his jacket. The boss asks him what he is doing.

“I am going home. How can I possibly be expected to work in the dark.

So a job half done and a story half told. Kind of sums up my day yesterday really.

I will try and explain about the artwork on my other blog.  Sunflowers In The Painting
Posted by Ralph at 08:03

Labels: abstract in the making.