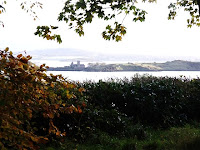 We here we are, All Saints Day, or as we now in Scotland say Halloween. Although more and more we are hearing the Trick or Treat version being bounded about as we import another tradition from over the pond. I now have a number of children living round about me so yesterday I bough a large bag of goodies just in case.

They will though have to look more scary than Archie does in yesterdays blog picture. Now I do not even have to wear a mask to do that.

I do remember when the children were young and we helped them dress up. All of the costumes were thought up and made in the homes, now the stores sell ready made costumes. The spirit of creation has gone from it altogether. Now they knock on the door, tell you a little joke you have heard a million times and want cash and treats. No more, dookin for apples and treacle scones on strings. But no doubt each generation enjoys things in its own way. As I was out running early a Halloween party for adults was still going on in a garden with the noise of people inebriated, changed days indeed.

Now talking of scary faces. I think I told the story of my daughter on who seeing her nephew for the first time was asked who she thought he looked like. She was meant to consider and say mother, father or both. She looked and declared he looked a bit like Gollum. She has never been allowed to forget that comment but it has not stopped her having a wonderful aunt and nephew relationship with him. She speaks of him so often with a real sense of joy and pride.

This reminds me of another story of a father meeting his son for the very first time. He had not been present at the birth so the first him he met him was on the ward of the maternity wing. He was wearing a yellow and black stripped baby grow and had those big eyes new born babies have. The father looked at him and without thinking said, “He looks like a bumble bee.” Just at that the nurse appeared beside the bed and said, “Ah you must be the new father you son looks just like you.”

A bumble Bee indeed the father must have had a real scary face.

Have a good day and beware of ghosts.  The picture is one taken while walking yesterday. This island is in the river Forth not far from where I live. As a young man I had a vision of rebuilding that abbey on the island and using it to help rehabilitate addicts. The dreams of youth.

My other blog has one or two more pictures taken yesterday.  The Wonder Of Autumn.
Posted by Ralph at 12:06