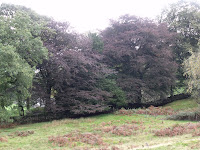 My morning run does so much more for me that get me fit and help to lose the excess weight. It also allows me to recover the steps of my youth. As I tread the lanes and paths I remember the times I tread them as a youth and more importantly the people who were with me. Now I am not one to dwell in the past but I do find it rewarding to remember some of the events and the lessons learned.

Regular readers of this blog are aware that I spent a lot of my youth walking with my father. It seemed we walked for miles, in reality it was not so far. I can now cover what I thought was a long walk in a very short time once the trainers are on and the legs are moving.

Today I remembered an incident that has travelled with me for the rest of my life. A friend and I one day decided to go on a walk our two selves. We set off flowing in the footsteps of one of the walks done with my father. It seemed to take so much longer without him. Maybe because we stopped to do things he might not have allowed us to do. Soon we were out in the country. We came across a row of farm cottages. By this time we were feeling tired and thirsty so we knocked on the door and asked for a drink. The old lady invited us in and gave us a glass of fruit juice and a biscuit, a real treat. She also gently lectured us about being so far away from home without having told our parents. We promised her in future we would do just that, and we did as during the course of that summer we visited her often. We learned many things from her and how I wish I had been wise enough to tell her how good it was to have her as a friend.

This reminded me of another true but similar story.

One day, a poor boy who was selling goods from door to door to pay his way through school, found he had only one thin dime left, and he was hungry. He decided he would ask for a meal at the next house. However, he lost his nerve when a lovely young woman opened the door.

Instead of a meal, he asked for a drink of water. She thought he looked hungry and so she brought him a large glass of milk. He drank it slowly, and then asked, "How much do I owe you?"

"You don't owe me anything," she replied. "Mother has taught us never to accept pay for a kindness." He said, "Then I thank you from my heart." As Howard Kelly left that house, he not only felt stronger physically, but his faith in God and man was strengthened also. He had been ready to give up and quit.

Years later, that young woman became critically ill. The local doctors were baffled. They finally sent her to the big city, where they called in specialists to study her rare disease.

Dr. Howard Kelly was called in for the consultation. When he heard the name of the town she came from, he went down the hall of the hospital to her room. Dressed in his doctor's gown, he went in to see her. He recognized her at once. He went back to the consultation room determined to do his best to save her life. From that day, he gave special attention to the case.

After a long struggle, the battle was won. Dr. Kelly requested from the business office to pass the final billing to him for approval. He looked at it, then wrote something on the edge, and the bill was sent to her room. She feared to open it, for she was sure it would take the rest of her life to pay for it all. Finally she looked, and something caught her attention on the side of the bill. She read these words:

"PAID IN FULL WITH ONE GLASS OF MILK....

It is amazing how small little acts of kindness can imprint on the lives of people. I hope some day someone will remember me doing something that helped form good intentions in their lives. I would feel that my life had not been meaningless.

So day by day I look to see if I can do such small acts of kindness. Will you join me?

Such is the way of Tao.