Those Who Serve Often Go Unnoticed. 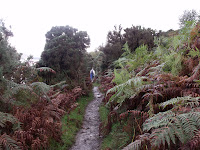 I was walking along a really rough boulder strewn track. It was wet, having rained heavy most of the night and still it was raining. Parts of the path was thick with mud. I was well prepared, I had run this very track earlier in the day and so I was prepared. Coming towards me was a man carrying a heavy bundle of sticks. Each stick had a small flag attached to it. Every so often he would stop and secure the flag to a spot at the side of the track. He was wet, cold and covered in mud. We spoke and he told me that the next day there was to be a cross country race and that he was out marking out the route. 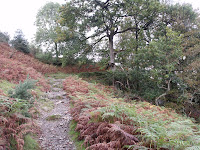 The next day the race took place. The runners set off at a great pace and from start to finish they followed the flags. At the finish line of the race people gathered to welcome home the runners, cheering them over the finish line. Standing at the back of the crowd clapping was the man I had watched the day before. I wandered over and said to him that I thought he had done a great job the day before. The race had gone smoothly because he, without thought of thanks had done his bit and prepared the route.
I remembered the story of the young boy and the Knickerbocker Glory, This was a large ice cream with fruit. A 10 year-old boy entered an ice cream parlour and sat at a table. A waitress came over to serve him ( do you remember the days when service was the name of the game?). “How much is an kickerbocker glory?” he asked. “5shillings” replied the waitress. ( This was in the time when that would be five weeks pocket money.)

The little boy pulled his hand out of his pocket and studied the coins in it.

“Well, how much is a plain dish of ice cream?” he inquired. By now more people were waiting for a table and the waitress was growing impatient. “Three shillings” she brusquely replied.

The little boy again counted his coins. “I’ll have the plain ice cream,” he said. The waitress brought the ice cream, put the bill on the table and walked away. The boy finished the ice cream, paid the cashier and left.

When the waitress came back, she began to cry as she wiped down the table. There, placed neatly beside the empty dish, were two shillings. You see, he couldn’t have the knickerbocker glory, because he had to have enough left to leave her a tip, and he wanted to do things right. Acknowledging the service was part of the way things were.

We have lost the art, to a great extent, of appreciating things done for us. Day in and day out the little acts of kindness go unnoticed. Because they do they also get less and less, and we all lose out in the end.

Each act of kindness acknowledged will lead to another one tomorrow.

This blog is linked to my other. A Day That Only Got Worse
Posted by Ralph at 08:11