You Have to be What You Are. 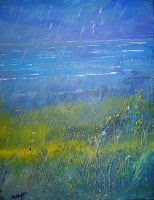 Yesterday just seemed to go on and on. I wrote my blogs and headed out, in what could only be described as a gale, to do my daily six mile run. Yes I know I am crazy, at least four people told me so, before I had gone the first half mile. In spite of the wind and rain I was running well, I felt a spring in my feet. At about three and a quarter miles I mad a turn to begin the homeward leg. The spring in my foot disappeared as the wind hit me full on. It is just a fact that circumstances sometimes come our way to make life harder, we just have to cope with them, they too pass. It felt good to get home and into the hot tub.

I then spent a long afternoon driving to the sports shop for new running shoes. Another story but not for this blog at this time. The good thought about this is that I was seriously considering my need for these. A few months ago had I thought about this I would have told myself to stop dreaming. Yes the new ones lie on the rack waiting for their first outing.

After evening meal I headed out for a walk. It was still very stormy. Along the coastal path the waves were crashing against the rocks on the shore creating great plumes of foam. It was marvellous to watch. It reminded me of the tale of the little wave.

The story is about a little wave, bobbing along in the ocean, having a grand old time. He's enjoying the wind and the fresh air – until he notices the other waves in front of him, crashing against the shore. “My God, this terrible”, the wave says. “Look what's going to happen to me!”

Then along comes another wave. It sees the first wave, looking grim, and it says to him: “Why do you look so sad?” The first wave says: “You don't understand! We're all going to crash! All of us waves are going to be nothing! Isn't it terrible?”

The second wave says: “No, you don't understand. You're not a wave, you're part of the ocean.”

I finished my walk as darkness fell. As I thought of the little wave I remembered another story.

Once a farmer found a dead eagle, and not much further on a nest and in it was an egg still warm. He carefully took the egg back to his farm and laid it in the nest of one of his hens. The egg hatched and the baby eagle grew up along with the other chickens. It pecked about the farmyard, scrabbling for grain. It spent its life within the yard and rarely looked up.

When it was very old, one day it lifted up its head and saw above it a wonderful sight - an eagle soaring high above in the sky. Looking at it, the old creature sighed and said to itself, "If only I'd been born an eagle.

Sometimes it is not easy to accept what it is that we are. Or the stage of life we are at. We want to change everything and make all things the way we wish. Other times we accept much less than we can in fact be.

Real wisdom is knowing the difference. Knowing when it is best to accept things and go with it or being aware that now is the time to lift out wings and fly.

This blog is linked to my other. Rainy Day On The Coastal Path
Posted by Ralph at 08:01