It All Comes Down To how You See It 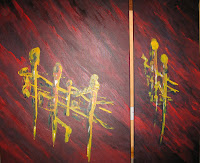 I went for a walk yesterday and met this man who looked as if he was carrying the world on his shoulders. When I spoke to him he began by telling me how he was getting old and finding life difficult. Turns out he was younger than me. He complained he got pain in his knee after he walked a few miles. I told him I had pain in my foot before I began. And so it went on, one complaint after another. Eventually I laughed and pointed towards the cemetery. I reminded him there were loads of people in there would love to have his complaints. He looked at me and laughed with me. We walked a bit and I told him one or two stories. He left saying he had a good afternoon. It all depends how you see things.

I have two stories for you today to illustrate my point. Sorry if they are too long.

The first concerns a man who was offered a job as a toilet attendant. He accepted, but when they discovered he could not read or write changed there minds. He was feeling down. On his way home he passed a fish shop. Outside were some empty boxes. He asked if he could have them. On getting them home he chopped them up and sold them as firewood. With the money he purchased more old wood. Before long he went from having a cart to owning a lorry. Then he went into the haulage business and had a fleet of lorries.

One day he saw a Rolls Royce car, he so wanted to own it. He entered the garage and offered to buy it. He was asked how he wished to pay, by cheque or credit card. He said cash. he explained he had no bank account because he could not read or write. He kept all his money at home in a safe. The garage owner looked at him amazed. Just think what you could have been if you could write. “Yes,” he said, “ just think.” he could have been a toilet attendant.

A man decided to start a hot dog business. He bought a cart, filled it with hot dogs, and pushed it down a busy city street during the lunch hour. He sold out, so he ordered more from his supplier. As the weeks passed, he kept expanding his business and became a successful vendor.

One day his son came home from college and gave him some advice.

“Dad, don’t you know what’s going on in the business world? Things are bad. We’re in a depression.”

His father replied, “We are? I guess I’d better cut back on my supply of hot dogs.”

So he did. He reduced his inventory, ordering only minimum quantities. Because he kept running out, his frustrated customers stopped buying from him.

Several months later he shut down his business.

That night he called his son at college and said, “Son, you were right. We are in a depression!”

Yesterday while walking we came to a small rugged made bridge. I had just a small gap in the middle, just a little hop. My wife looked at it, “I will never get over that great gap.”

The way you choose to see the world creates the world you see. Pessimists expect the worst to happen, which often becomes a self-fulfilling prophecy.

The glass is in reality either half empty or half full. It is all up to you.

This blog is connected to my other. Music Movement and Life
Posted by Ralph at 07:33