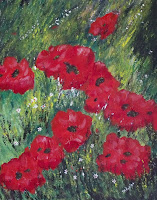 I apologise that this morning my story begins again with a tale of running but I really just had to share this with you. Since my fall I had allowed myself to get so very unfit. I had not realised just how unfit I had allowed myself to get, until I tried to go for a run with my wife. She had to keep stopping and waiting until I caught up. So humiliating for it had always been me do the waiting.
Yesterday 28lbs lighter and a lot of walks and runs under my belt I was at the two mile mark a full minute and a half before her. I have to say it felt good, even to the point that I was feeling bad about just how good it was feeling. It was after all not a competition; it was just an exercising run.

I have though, to admit, always been very competitive. It feels good to be fit enough again that when I see a runner out in front of me I just want to catch up and maybe even pass them.

Now the reason I am sharing this is because this little incident reminded me of another story of a similar incident.

Long ago there was a young athletic boy hungry for success, for whom winning was everything and success was measured by winning.

One day, the boy was preparing himself for a running competition in his small native village, himself and two other young boys were to compete. A large crowd had congregated to witness the sporting spectacle and a wise old man, upon hearing of the little boy, had travelled far to bear witness also.

The race commenced, looking like a level heat at the finishing line, but sure enough the boy dug deep and called on his determination, strength and power he took the winning line and was first. The crowd was ecstatic and cheered and waved at the boy. The wise man remained still and calm, expressing no sentiment. The little boy, however. felt proud and important.

A second race was called, and two new young, fit, challengers came forward, to run with the little boy. The race was started and sure enough the little boy came through and finished first once again. The crowd was ecstatic again and cheered and waved at the boy. The wise man remained still and calm, again expressing no sentiment. The little boy, however, felt proud and important.

"What has happened? Why are the people not happy for my success?" he asked the wise old man.

"Race again", replied the wise man, "...this time, finish together, all three of you, finish together" continued the wise man. The little boy thought a little, stood in the middle of the blind man and the frail old lady, and then took the two challengers by the hand. The race began and the little boy walked slowly, ever so slowly, to the finishing line and crossed it. The crowd were ecstatic and cheered and waved at the boy. The wise man smiled, gently nodding his head. The little boy felt proud and important.

This time the people cheer for the event.