Please Bring Your Own Spade. 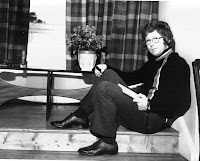 There are every now and then days when you make a little step forward and you just know that it was a significant moment. More than once, fellow bloggers have said to me that if I stopped worrying about painters block it would just one day disappear. They were right, but nothing ever just happens in life we have to make it happen.

I remember being visited once by a young man while I was a minister. He had fallen on hard times, some of which was of his own making. He was an angry young man that morning. It was a Friday morning; I was in the study in the church building, doing preparation for the sermons I would preach on the Sunday. He was blaming everybody for the ills of his life. He said, “I joined this church because you said faith moved mountains.” I got up walked past him opened the door, looked out and then gently closed it again. I sat opposite him and said, “I notice you did not bring your spade.” I told him that faith could move mountains but you have to bring your own spade. I also pointed out that he had blamed almost everybody for his ills, except the most important person of all, himself.

It did change his life. I could almost see the penny drop.

I remember a day when I was out walking with my father. I cannot remember how the conversation had got to where it was, but I had made a comment about doing things to the best of my ability. He went on to tell me that he thought that was good. He then said, “When you do something the first time, do it to the best of your ability. The second time you do it, do it just a little bit better.” What he was saying was in fact go the extra mile.

My old Grandmother was the font of wisdom. I often wonder what she might have become in life had she not lived during a war in which her husband was killed. She one day told me something I have never forgotten. She said, "In life there are those who work all day, those who dream all day, and those who spend an hour dreaming before setting to work to fulfil those dreams. Go into the third category because there's virtually no competition".

I am so grateful for yesterday. For all of those who took the time to get in touch with me. Those who wrote comments; and those who emailed me. Those who challenged me to try other things. On my other blog today I will post another attempt at the Jackie drawing and make further comment there.

Jerry is so correct. Blogging is a marvellous place and together we could achieve so much. Artists have never before had such an opportunity to share. Can you imagine what impressionism might have been like if they had the world of blogging to share their message?

Oh, the picture at the top of this blog is just there for a laugh. Feel free to do so. This was me just about the time I was having that conversation I have related above.

Please do go and read my other blog.  Its Jackie Again
Posted by Ralph at 08:06