Tell Them You Care. 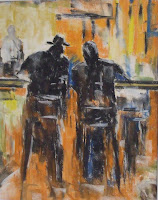 I am going back in memories today, sorry. Was something that happened yesterday made me remember this true story. I have thought about it before but never mentioned it on here.

I had moved from being a minister to becoming a teacher of world religions and philosophy. Like all other trainee teachers I had to do a year in teaching practice working with a principal who had committed to take on probationers and help them. I remember one particular class that had a number of pupils in it with behaviour problems. I was so unused to having problems with students, so many of them seemed to find their ways to my room at lunch hour and before the day began, I thought I was good with them. yet here was a difficult group. The principal, when I asked for a strategy shrugged and told me I seemed to be doing ok with them, better than most. I felt ok but unhappy I was going to leave that school feeling I had not done the best I could.

One day I thought I would try something I had learned as a minister. Something I had picked up somewhere, I do not know, and used in the training of church elders.

I gave each student in the class a sheet of blank paper. On it I asked them to list the names of all the other students. I then asked them to write one sentence about each of their classmates. The comment they were asked to write was to be a positive comment, stating a good quality the student possessed.

This task took them the whole of the teaching lesson, and it sure did keep them quiet.

At the end of the session I gathered them all in. That night I made each student a sheet with the comments made about them by their classmates. I did not identify who said what, just gave them the list.

It had an amazing effect on that class. For the rest of my year with them I actually looked forward to last period Tuesday afternoon class 2C.

Some seven or eight years later I was contacted by a parent of one of the more troublesome of that class. The son had been involved in a motorcycle accident and had been killed. When they were cleaning out his room they had found the sheet. They had asked his friend about it and he had explained. It seems he had kept his sheet also and so had some of the others in the class.

It seems that for some of them that lesson had been a turning point. That exercise became a standard lesson each year with all my new class groups.

It is amazing the change it can make to a person to be told what it is about them that others like. To know that they do not need to be a bully or the class clown that people care about them as they are.

It is never too late to tell somebody you love them or care for them or respect them. As I have said I do not claim to have been the originator of this idea and you may have heard of it before but it worked well for me.

I no longer give out sheets of paper but I do try to find out little things that people like about each other. If anybody ever says anything to me about a person, good or bad I always then am able to say. “Strange that because they think this about you. They told me this once.” Works every time. I call it my little notebook of good things people say about others.

It is a bit like blogging really is it not? I realised that yesterday when somebody commented on my blog about somebody else, and somebody else said something about me on theirs.

We are a great group here I think.

This blog is linked to my other. The Conspirators
Posted by Ralph at 07:33