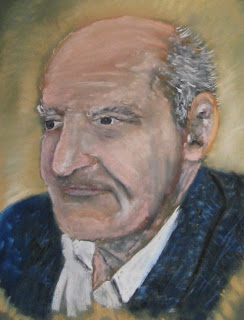 An old farmer had worked his fields for years, providing food and home for himself and his family. It had always been very hard work and he had worked long hours. Each season had brought its different tasks, but he had worked in harmony with nature and the farm had provided well. When his son had grown they had worked together. The son had got married and tighter they had built a home on the land for him and his wife. With additional mouths to feed they had worked harder bringing more land under cultivation.


The old farmer had grown older and older and with it came the frailty of old age. Now the son worked the farm and the old man spent long periods sitting on a chair at the door of the house watching the son working in the fields, gathering the lavender, drying it and taking it to the perfumery.

One day, after a very hard day in the fields the son had thought, “He is of no use to anybody anymore, sitting there all day waiting to be fed.”

So he went to the barn and he made a wooden coffin. He dragged it over to the door of the house and told the father to get into it. The old man did as he was told and lay in the coffin. The son put the lid on and dragged it through the fields to the edge of the farm where there was a very high cliff. Just as he was getting ready to push it over, he heard a tap coming from inside. He lifted the lid and looked at the old man lying there peacefully.

The old man spoke and said, “I know you are going to throw me over the cliff because you consider me of no value. I have no worries about that,” said the old man,”but before you do take me out of this box and just throw me over. Keep this fine coffin because one day yours sons might have need of it.”

The old man might have lost the physical strength of his youth but he still had the mind that was active and nimble of thought. We live in an age when as we get older we often seem to become less visible.

I have an old friend, yes I may be suffering from youth deficiency, but I have a friend much older than me who still has much to teach and there is much wisdom for those who are willing to listen. Which one of us cannot learn from another? There is so often words of wonder pour forth from the mouths of babes.

This blog is accompanied by another that gives the story of the art it can be seen at:-Archie
Posted by Ralph at 08:02