It Is All In The Mind 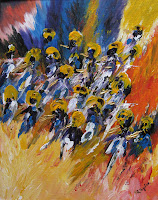 I am certain that every one of us can remember a teacher from our youth who inspired us to achieve great things. Equally I am sure we can all remember the ones who turned our interest from their subject, for at least the duration of their teaching period or sadly longer.


I remember four such teachers, two excellent ones and two that can be described as nothing short of horror. On reflection they probably had more influence than they ever realised. I had an art teacher who was very quick to show that a drawing was not up to scratch and therefore had to be done again, and again. I went through most of my life believing I was hopeless at art. Then there was “caveman” the mathematics teacher. He held the record for giving the tawse. (A leather belt with two tongues on the end used to administer discipline). He never praised a pupil for the five problems solved, he always pointed out the one that was wrong. I had the pleasure of his teaching for the entire period of my secondary education. I dreaded the days when I had lessons with him on my timetable. It is not at all surprising that I am still pretty hopeless at mathematics.

I remember with great fondness two teachers who inspired me to write. My love of poetry came from those lunchtime poetry reading sessions with one of them. It was during my tenure with this teacher that I, for the only time in my life, had the number one position on the annual report cards. Also not at all surprising that it was to one of those to whom I went when I wanted advice about further education in later years.

There is a story of a momentous battle, where a great leader under attack decided it was time to take the battle to the enemy, although greatly outnumbered, he felt sure victory could be theirs. His men were filled with doubt and fear. On the way to the battle he stopped his army at a small roadside shrine. He stood quietly for a moment then addressed his men. He told them that at this place he would be able to find out the outcome of the battle. Here like no other place the toss of a coin was true in its message. He told them he would toss a coin and if it came up heads they would win, if it came up tails they would lose. He tossed the coin. He watched anxiously as it hit the ground. “It is heads!” he declared. The men were filled with confidence and went off to win the battle against all the odds.

At the end of the battle one of his lieutenants approached him and said, “Nobody has the ability to change destiny.” “You are correct,” said the general and showed him the coin with heads on both sides.

To always be positive and to always inspire is the way of Tao.


This blog is linked to another which I consider to be a small addition to this blog where I look at the artwork and  why the chosen artwork was used. I did not wish to clutter this blog with that inforamtion Maybe I was wrong?  It can be seen at :- Carnival Jazz
Posted by Ralph at 08:05