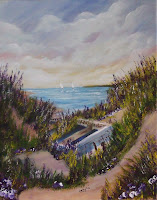 The village was finding life difficult because of the long spell of dry hot weather. The crops were failing because of the lack of water. The village had one well and the water from it had to be rationed to two containers per family per day. If something did not happen soon there would be really difficult days ahead for all.


One of the villages, a shepherd, remembered that he had once found another well in the hill foots not too far distant from the village. He had tasted the water and it had been clear and refreshing. He packed a bag with some food. He put this in a bucket and collected a rope which he thought would be long enough to reach into the well.

He travelled to the spot he remembered and sure enough there was the well. He lowered his bucket into the well and when he pulled it up it was full of clear sparkling water. He filled the skins he had brought with him and made his way back to the village, where he entered by a back way.

Two days later he made the same trip and again returned by the back way concealing his water in his house. This went on for sometime, during which time the villagers were still surviving on restricted rations.

On his return journey he was met by two men from the village. They asked him where he had been. He told them he thought he had remembered a well and had gone to check it out, but it had been empty. The men of the village were immediately suspicious because he did not look like one who had been suffering as they had.

They asked him to take them to the well, which he did. He dropped his bucket and sure enough it came up moist but empty. One of the men asked to be lowered into the well so that he could take a closer look. When he arrived at the bottom of the well it became obvious that the well was not dry but that with the continual sliding up and down of the bucket by the inexperienced shepherd the well had been blocked and diverted. They were soon able to restore it and the village was saved. The shepherd packed his things and left never to be seen again.

I am sure there are many more lessons to be found in this tale. For the artist to continually draw from the same source, does the art become stale like stagnant waters?

I would love to hear if you have any thoughts about this story my mind if full of where I could have taken this one.

Can I say anyone asks a question I do attempt to answer it on either blog. This blog is linked to my other on where I discuss the art used. :- High and Dry
Posted by Ralph at 08:14