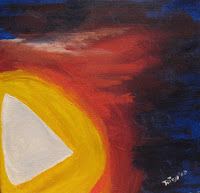 I am aware that it does not happen in every country but twice a year we change the clocks, either back one hour or forward one hour. It is easy to remember which way it goes with the little reminder, “spring forward, fall back.” So this weekend in the UK it goes forward one hour. This happened first during the First World War it had to do with blackout time. Like so many things it has stayed the same ever since. Each year there is the discussion about whether it happen or should or not. There are all the arguments about children going to school in safety and farmers getting more daylight hours. All of it seems a bit odd to me because no matter what we do with the clocks and no matter what the arguments are it is different in Scotland than in London where the decision is made.


There is a story of the monastery cat. The monastery had a pet cat who did not like silence very much. So every time the monks went into their daily periods of silent meditation the cat would come into the temple and make all kinds of noises to the distraction of the monks. It was decided that during these time the cat should be tethered outside the temple for the duration of the times. This worked well and the cat was repaid with extra attention by the monk who tied and untied her. He always had a special nibble for her at those times. The cat lived to a ripe old age seeing off many of the monks. When she died she was buried in the grounds of the monastery. The monks got a new cat, and at meditation times it was tethered. Nobody wondered if it would be like the cat before they had just always done it that way. As the years rolled on each cat in succession was tethered and people used to try and work out why this was so and what significant meaning it had.

I remember when I was minister in a church with a much crowed chancel area. There were two rows either side of the chancel where seldom did anybody sit. When I suggested removing them I was told we could not, they had always been there. Certain people had once sat there. One person even said she remembered her grandmother sitting there, even though she herself was now a grandmother. After much deliberation the seats were removed and the chancel opened up. The space became so much more versatile and worship was enhanced in so many ways. Now it is just accepted that is how that building is, few remember it as it was before.

It is so easy to get stuck in ruts, but to break free now and then opens the doors to creativity. Paint something different, write something in a new genre try new things and find new meaning. You might even find a new you.

This is the way of Tao

Apologies if there are errors in this blog today yesterday I was washing my caravan and fell from the roof. Today I find myself in extreme pain. This was written butt not checked. I have managed to put it online before crawling back to bed. So sorry I will not be viewing blogs today will miss doing so.

This blog is linked to my other where I discuss the artwork used. :-The passage of Time
Posted by Ralph at 08:48