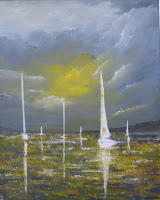 Monifieth is a beautiful little place on the east coast of Scotland. It has one main street and a beautiful beach. I was reminded of it by a comment made on a recent blog by Sharon who lives and works in Dundee not too far away from Monifieth. I lived and worked there for a year as assistant minister in the beautiful parish church. I was doing my probationary period before seeking a church of my own in which to minister. The minister there was full of life and a marvellous man to have as a guiding hand. Just over the road from the church was a small cobbler shop where you could have new soles and heels put on your shoes. One day I noticed he had a special offer notice in his window offering to save heels on shoes ant a reduced rate. I saw humour in this and made an almost identical notice for the church notice board offering to save soles (souls) for free.


The church has two very beautiful stained glass windows made by a very well known stained glass artist. It also boasted two magnificent silver communion cups. These were kept in the vault at the bank and only brought out on communion Sunday and after the service returned to the bank for safe keeping. It was decided that for insurance these should be revalued and the policy brought up to date. An appointment was made with an expert and on that day both the minister and I were to be in the church. This was in the days when smoking was allowed in public buildings. The minister was a smoker and in those days I smoked a pipe. Prior to Sunday worship he and I used to have a last little puff together. There was an old pewter plate lay on the desk in the vestry which was used as an ashtray to stub and knock out cigarettes and pipe. On the day of the valuation we were waiting in the vestry with the valuable cups having a puff. The expert put a value on the cups much higher than had been expected then just before leaving he said. “Would you like me to value the pewter plate?” We both looked at him. “You mean the ashtray?” “Yes,” he said, “It is probably worth more than the two cups.”

How often we fail to see that which is of real worth because our sight has been taken by the glint of that which seems to be the more value. A painting to one person can be of much more value than to another if it evokes emotion and stirs up memories. I had a painting of some yachts sailing in the River Forth. It had hung in the inn close to the River Forth for weeks and although liked by some not enough for anybody to offer to purchase. I changed it for another and brought the yachts to another place I hang. I customer there fell in love with it but could not afford to purchase. One day another customer asked me if he could purchase. I saw her face and almost said it was not for sale. He bought it and immediately gave it to her. As I left the place she was in tears of joy. I left in hurry because I was also overwhelmed. Beauty is in the eye of the beholder. The painting on the fridge door painted by a child is worth as much as any done by an old master.


The painting used is discussed in my other blog which can be seen at:- Evening Sails Along the Forth
Posted by Ralph at 08:09