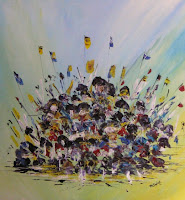 While gardening in my plot I was aware of the number of leeks I still had not harvested, over eighty still had to be dug. Talking to person who has the neighbouring plot I bemoaned the fact that I had so many. “This is good,” said she, “I have none, so I can have a few of yours.” This I was happy to do and also made me aware of the many other friends I had who might enjoy a fresh grown leek. “What is more,” said my friend, “you have no Jerusalem artichokes so I can give you some of those in return.” So I enjoyed those and a great many people in the village are even now making leek and potato soup.


There is a story of two friends, one who was an emperor and the other who no matter what happened always declared, “This is good.” One day the two were out hunting, the friend loaded the rifle of the emperor who shot it and in the process shot off his thumb. “This is good said the friend.” “How can you say that,” yelled the emperor? “How can you say that when I have lost a thumb and I am bleeding badly?”

The emperor was so angry he put his friend in prison. About a year later the emperor went hunting again, this time on his own. He was captured by a clan of marauding cannibals. They tied him up and trussed him to a stake. Just before they set light to the fire to cook him for eating they noticed he was missing a thumb. This particular tribe did not believe in eating anything that was not whole so let him go free.

The emperor rushed home and went straight to the jail. “It was good my losing my thumb,” he said to his friend. He told how it had saved his life. He also told him how sorry he was that he had put him in jail. “I feel so bad about that,” he said “No, not at all it is good,” said the friend. “If I had not been in jail they would have eaten me.”

So what does this tell us? It simply tells us this. “It is good.” When we as artists think we have hit a disaster area and all is wrong, look again, it may be good. When it is wrong, that is good because it is a wonderful learning opportunity. For all of us no matter what happens, remember, “It is good.”