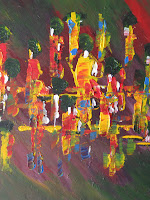 When I was a boy I heard an interview of a very famous clown. He was being asked about his act and what he found the scariest part about his performance. The interviewer, equally famous, went through all the things the clown did, from falling off tightropes to what seemed dangerous things he did with a car that fell apart. The clown described all of those in detail and told of the amount of practice that went into getting the timing correct so that none of the performers were hurt. “So,” asked the interviewer again, “what is the scariest?” The clown thought for a moment and then said, “When the act is over and I have to take off the face paint and be myself again.” he revealed that when not working he suffered from severe depression and found it hard to live with himself.


A student had studied under his master for ten years. At the end of this period of time he was sure that he had learned much about himself and how to control his life and find the peace and happiness he sought. He went to visit his master to declare this to him and to tell him he was now going to begin teaching others what he had learned. “Ah,” said the master. “Tell me when you came in did you leave your shoes and umbrella at the door?” “Yes I did,” said the student. “Did you leave the umbrella to the left of the shoes or to the right?” The student then realised he still had much to learn about self awareness.

I had a feeling I had lost something and looked around my study and workroom. As I did so I became aware of the clutter and so began to tidy things up, bring some order to the chaos. As I did so I played some music, a selection I had made of tunes I enjoyed listening to. As I worked one piece caught my attention. I stopped what I was doing and went to my computer. There I put on the same music and I opened the folder of pictures of my abstract paintings. I studied the one that I had painted one day as I listened to this very music.

Once the music was over, I closed the folder and went back to the task in hand. It was then that I realised that I had found what I had lost. I had found again the desire to paint. It had left me but I had found it again in the midst of creating order from my chaos.

Self awareness is never easy. Without it we allow ourselves to be thrown this way and that by what happens around us. So sometimes what we create is not as good as we had hoped, sometimes it is better. The important thing is to be able to know and to be honest with ourselves. I walked along the coastal path for a bit yesterday and all the old feelings were back I had indeed found myself.

Such is the way of Tao.

The artwork used in theis blog is commented on in my other blog which can be seen at:-Highland Gathering
Posted by Ralph at 08:03