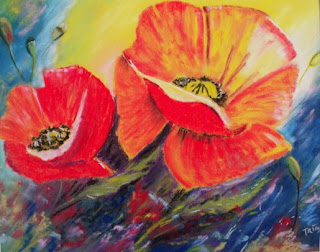 A wealthy business man was given a gift of an original work of art by his company on the date of his retirement. He so loved the painting, firstly because it had been given as a gift but also because he loved the painting itself. He was also very proud to own it because he was aware of its value in terms of the amount paid to purchase it. It gave him much pleasure, so much so that he decided he would collect more valuable works of art.


Sadly he did not always buy because he liked the art but because it had a monetary value that was within his budget. It gave him a thrill to win at an auction and to become the owner of art that others wanted.

One particular acquisition brought him much pleasure, a valuable vase. The vase was made of very delicate porcelain and hand painted. It was given pride of place in his room of “collectables.” From time to time he would invite friends in to see his art. Each time he would tell the story of how he acquired the item and how much he had paid for it. It gave him much pleasure.

He installed many security devices and paid a heavy premium on insurance. All worth it he thought, because of the pleasure it gave him.

One day he was in his room enjoying his collection. He reached up and took the precious vase into his hands. Cold to the touch he turned it and admired it, how proud he felt to have it in his possession. Just then he felt it slip from his hands, his heart raced. He grasped for it and caught it just before it crashed to the floor. He breathed a sigh of relief and sat down with the vase secure in his grasp. It was then that he realised how important they had become to him. For a moment he had sensed fear and all sorts of other emotions at the thought of the loss. He looked at the vase again, and thought of what had just happened. As he thought he opened his hands and allowed the vase to fall to the floor, where it shattered into many pieces. With it a sense of relief welled over him, he had come to his senses. He had re-discovered his priorities. His friends and family were more important than these, beautiful though they may indeed be, but they should bring joy to many in the seeing of them and not just because of their value.

We all know somebody who has lost all sense of the value of what is important in life. Material possessions have become more valuable and of worth, than the love of friends. Some live in such fear of people stealing their precious items they live in almost barricade conditions.

Never does a painting leave my possession without my feeling a pang of regret. Regret that I may never see it again. That feeling is soon overcome by the knowledge that others may have pleasure from it. When later I hear that they are still enjoying telling friends about it, makes me feel very happy.


The  explanation of the choice of picture can be seen at :- The Glory of Poppies
Posted by Ralph at 08:03