I Do Not Know 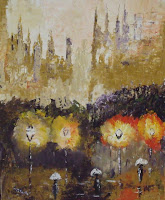 I read an interesting book on art a few years ago. I was just starting to explore the possibilities of panting now that I had given up teaching. I visited the library and the title of the book seemed to catch my eye. “All you will ever need to know about art.” I found this an interesting title to say the least. Then I saw another, “The artists Bible of Art.” Now I am not sure that those titles are exact so do not go looking or surfing to find them. The titles are very close to my memories of them.


Both books had obviously been written by artists with a great deal of confidence in their subjects. The books were indeed sweeping in the sense that they gave the reader many options and possibilities. What I found a bit strange about these books was that both authors admitted to not actually using some of the mediums being described and yet they went on to give advice to the beginning artist on how to best use them.

I learned from these two books but from the chapters where it became clear the author had first hand knowledge of the topic. How much better a book this might have been had they left out the other chapters.

I had an interesting hour last night. My son invited me out for an evening glass of wine and a chat. I love those unexpected moments. On this occasion he was seeking knowledge that I could not give but my wife was well equipped to give. I quietly tuned my ears to a discussion of a group of men gathered at another table near by. I soon realised they were experts on golf. There was not a thing about golf it seemed they did not know.

I remembered the story of the discussion between the emperor and the master. The emperor felt that having reached the stage of life he had there was little that he had to learn. There was one thing only that he felt he needed the answer to so he approached the master who was older than he.

“How should I know?” asked the master.

“Because you are old and enlightened,” said the emperor.

“Yes sir,” said the master, “but fortunately not a dead one.”

No matter where we have reached there is always more to learn.

Can I take today to once again thank all my blogging friends for the things they teach me day by day.

This blog is linked to my other blog where I discuss the artwork used:- Summer Evening Showers
Posted by Ralph at 08:38