Arthur Not Of The Round Table 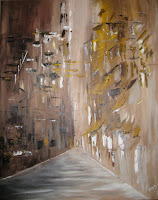 It was a lovely sunny day and a great many people of the village had gathered on the grassland park at the end of the village. At the lower end of the grassland stood a foundry that had been there for a great many years making iron cast mouldings. The moulding were intricate and of a very high quality. One such was a metal representation of, “The Last Supper” by Leonardo da Vinci. The life of the foundry was coming to an end. The people had gathered to watch the demolition of the chimney stack. As I gathered them to await the moment that would mark the beginning of the end I was approached by a man who introduced himself to me as simply Arthur. We began to speak and I soon realised this had not been an accidental meeting. Arthur had wanted to “bump into” me for some time he said. He explained that he was an ex police officer who had ruined his life with alcohol. He was now a recovered alcoholic and getting himself back on the road of life.


He was wondering if I could help him in one or two ways. He wanted to start a local meeting of alcoholics anonymous, and he wondered if he and I could together set up a help group. This was to be the start of an interesting part of my ministry. At one point we even had an old ambulance parked at the back of the church that could offer instant overnight accommodation. That is for another time.

Arthur used to tell a story of how his life had changed. He had lost his job in the police and was in danger of losing his wife and family. It was a Friday night he had been drinking all day and certainly was not in a state to return home. No taxi driver wanted him in their cabs. He along with another drunk decided to spend the night in a cheap hostel. When he was given a couple of blankets he was shown into a large room full of people in the same state as him. He told of the terrible smell of the place. He looked around and said to the man lying on an old mattress, “You can’t get much lower than this can you?” The old drunk looked at him and said, “Another six feet lower son.” Arthur tells how that night he cried himself to sleep. The next morning he headed home and from that day he had never had another drink of alcohol. Together we had an interesting time and because of him there are marriages that would not have survived now happy and lasting, lives restored.

Often when I feel that things are at a low ebb and nothing seems to be going right for me. Those times when I want to throw the paint and easel in the bin. When I produce nothing I am happy with, or as has been the case I have been unable to stand long enough to paint, I remember Arthurs story and give myself time to reflect. Yes it could be a lot worse.

This blog is linked to my other blog where I discuss the artwork:- Happy days and Holidays
Posted by Ralph at 08:04