The answer is in our own hands. 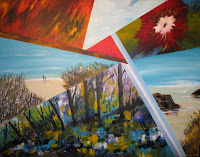 A young student on day caught a beautiful bird and held it is his hands. As he looked at the bird an idea came into his mind how he might catch his teacher with a question he could never answer correctly. He went to his master teacher and held the bird behind his back. He told his teacher that he held the bird in his hands and asked him, “Sir is the bird alive or is the bird dead?” He thought, if the teacher says it is dead he will simply open his hands at it will fly away and the master will be proven wrong. On the other hand if the master said that the bird was alive he would simply wring its neck and produce the dead bird.


The teacher on being asked the question stood still and thought for a moment. “The answer is in your own hands,” he said.

The stickleback was swimming in the river this way and that, with the current and against it. As he swam the water rat saw him and thought here was an opportunity to cause some disturbance. He swam over and said to the stickleback, “If you do not find water quickly you will surely die.” The stickleback in panic swam up and down searching for help for he did not wish to die. He came across the water vole and asked him where he might find water. “Why do you ask that?” said the vole. The stickleback told the vole what had been said to him by the water rat. The vole saw the joke and decided to continue it. “I have not got a clue,” he said. “But find it you must.”

The poor stickleback panicked and rushed here and there. He then saw the wise owl sitting watching him from the bank. He swam over and asked the owl if he knew where he could find water. The owl looked at him and smiled. “What do you find funny?” asked the stickleback. The owl said, “You are in the water. It is the water you live and move in, it is the water that gives you existence; it is all around you moment by moment.

So often we spend so much time seeking answers, seeking inspiration wondering where and what. So often the answer lies in our own hands. That which we seek is there within us all the time.

This blog is linked to my other which can be see at:- Splintered Dreams
Posted by Ralph at 08:27