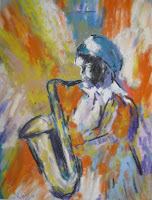 My daughter from day one showed an independence that has continued throughout her life. From a very early age she new what she wanted to wear each day and no matter how hard we tried to convince her otherwise she had made her mind up. This often meant that after having her breakfast she headed off to get dressed you just never knew what she would be wearing. It would beautiful summer morning and she on her mothers suggestion she would have her summer skirt on accompanied by a heavy woollen jersey hat and gloves. We look back now at some of those early pictures and comment on her wonderful dress sense.


When she was four she wanted a shopping trolley, the kind you pull behind you on two wheels. Monday was my day off, treat day. Lindsey prepared to go shopping. Cherry lips and floral gums and two ten pence mix ups. She insisted on going to the shop on her own. This involved discreet organisation. A phone call was made to the shop keeper that she was on her way and another to the organist who lived halfway between the shop and the manse. She always returned walking proudly with her purchases in her trolley.

I was the same with speaking. We wondered if she ever would. Then one day when her Gran was around and giving our dog a ticking off, Lindsey said in a loud voice, “Don’t shout at my Tara.” She really has never looked back in the talking stakes since then.

At the age of 17 she left home to go to university and live in a flat. It all happened so quickly the university called in the morning to confirm her place and she had to move in that afternoon. As we left her at the flat her mother was in tears but Lindsey was the one saying I will be fine. Of course she was just that. She is still the same independent person as she was then as today she celebrates her birthday.

The hand that guides is the gentle hand that lets people feel they are doing it all by themselves. The teacher who encourages self discovery is will always be the one remembered. The greatest lesson of all is the lesson that says, “You cannot love or heal the world till you have learned to love yourself.”

This blog is linked to my other blog where I speak about the artwork used. It can be seen at:-The Jazz Player
Posted by Ralph at 08:18