The Tigers and the Strawberry. 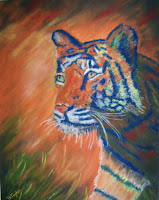 A man was on a journey and was travelling across a field as he moved across he met face to face with a tiger. He ran as fast as his legs would carry him, the tiger after him. He arrived at a cliff edge and there was no way he could turn back. He grabbed hold of a vine and swung himself over the edge. He looked up as he hung from the vine and saw the face of the tiger looking back down at him, waiting. In great fear he looked down. Not only did he see a great drop but he also saw at the bottom of the drop another tiger looking up at him. The only thing that was saving him was the precious vine.


He looked up again at the tiger and at that moment, to his horror he also saw two mice. They had started to gnaw at the vine. To his right he saw a luscious strawberry. Holding on with all his might he reached out and picked the strawberry. Never ever in his life had he tasted a strawberry as sweet!

I remember once slipping on a mountain track and falling. Fortunately there were no tigers waiting at the bottom just a river. It was a steep drop and I could easily have landed not in the river but on the rocks at the edge. I hit the side twice on the way down and fortunately landed in the water hitting the bottom of the river. I remember it as clearly as if it was yesterday the thoughts that filled my head between top and bottom, amazing how much in such a short space of time. It was a life changing event. I remember one of the thoughts was that I would not be able to run in that years London marathon even though I had a place. How sweet it was to stand on the starting line and hear the starter’s pistol.

Every empty canvas should be respected by the artist as if it was the last canvas they might paint. Every day lived as though it was the last and ever moment cherished.
Posted by Ralph at 07:34

Labels: a parable, last canvas, painting for all ones worth