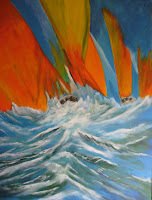 The young boy arrived home from school to be greeted by his mother. “Well how did school go today she asked?” “It was ok,” he replied. “And what did you do at school today?” “Nothing very much,” answered the boy. “You must have had something interesting,” retorted the mother. “Well we got this story about Moses,” he said. “Moses was trying to escape the Egyptians and they were being chased in the desert. The Egyptians had their fighter jets and they were strafing the escaping Israelites. They had to move fast because the Egyptian tanks were catching up. The came to this big river and Moses got his men to build a Bailey Bridge over the river. When it was built they all crossed and then when the Egyptian tanks were trying to cross they blew up the bridge and sank all the tanks.” “They did not tell you that,” said the mother. “No,” said the boy “but if I told you what they told me you would never believe it.”


How we try to make our lives more interesting. A small exaggeration here and a little fib there. Stories over time get more dramatic, conversations take on an extra turn or two. We do not mean any badness we just want it to all sound more interesting.

A Taoist was looking for happiness. He had thought of all sorts of things that might bring him happiness but to no avail. He sought out a sage and asked him if he could help him to find the answer to his search. As if he was ignoring his question the sage asked him. “Did you have your breakfast this morning?” “Yes answered the seeker, I did have breakfast.” “And did you wash your bowl when you were finished?” asked the sage. The seeker wondered why when he had asked such an important question he was being asked this, but replied, “Yes master I washed the bowl.” “Good,” said the sage,” and did you wash it well?”

It was then that the seeker after happiness realised that he was being told the answer to his question was to be found in the mundane tasks of every day. That by doing everything to the best of ones ability one will find happiness in everything.

I found cleaning up after working long on a painting such a terrible chore. I have a friend who hates painting the edges of box canvases and put the task off till she has a bundle of them waiting to be done. I have another friend who hates sorting out the inevitable bundle of pastels lying around his easel at the end of a pastel work.

Taoism tells us we can and should find value in every task. The chore of cleaning brushes becomes a joy, when you see it as not the end of a painting, but the first preparatory step to the next one. The same with cleaning paint pots away. Cleaning and putting back pastels allows you to enjoy the colours and to begin thinking of when you will use them next.

It all takes effort, but it is so easy to fall into lazy habits and lazy thought patterns, and this can so easily be the first steps to negative thinking. See each thing we do for what it is, and how it is, and do to the very best, then be still and happiness will follow as surely as night follows day.