The students in the monastic community were studying under a very wise sage. One of the students loved to slip out at night and have a wander round the town, something that would be frowned upon by the wise old sage. The student used to climb over the wall at the back of the garden so that he would not be seen leaving. One night the old master was checking on the dormitories and noticed the young student’s absence. He walked round the wall until he came upon the stool that been used by the student to get out of the garden over the wall. He removed the stool and stood quietly meditating under the wall.


When the student returned he placed his foot on the masters head and jumped back down into the grounds. On landing he discovered what he had done and stood in shocked silence.

The wise old sage said, “It gets very chilly of an evening. Please be careful you do not catch a cold.” He then left very quietly. The young student thought for a moment. He never ever crept out at night again. 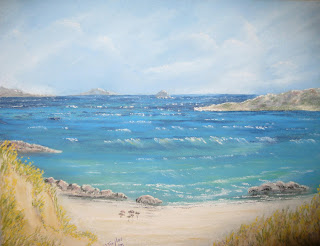 I lived on the beautiful Island of Iona for a year when I was trying to teach myself enough to be able to pass the examinations that would allow me to enter university. I had been living a fairly wild and hectic life up until then and living on a dry island (an Island with no bars or places that sold beer) was to say the least a learning experience. I had to work on the restoration of the Abbey during the week and for this I was given my keep and a little pocket money. On a Saturday a tourist ship anchored in the sound and allowed its passengers time to come ashore and to visit the abbey. Now and again I and another young man used to slip out to the ship and have one or two ales. On one particular Saturday when we arrived back on the jetty at the village of Iona, standing on the jetty was Lord George McLeod the founder of the Iona Community, and the person responsible for the rebuilding of the abbey. I thought I was in for big trouble but all he said was, “The beer on that ship is a bit expensive I must be giving you too much pocket money.” That was my last trip to that ship all summer.

It is possible to encourage people to greater things without giving a long lecture or being censorious. We artists are often the worlds worst for saying too much and in the process discouraging others to progress. Positive and to the point. I remember a teacher who I am sure knew his subject as well as any. His trouble was he never used three sentences when twenty three could be found to say the same thing.
Posted by Ralph at 07:31