Age and Its Many Faces 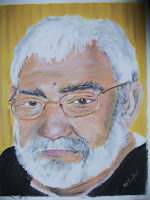 Memories can happen with the simplest of events igniting within us thoughts of times gone. Travelling down a path I walked with my father as a very young boy I remembered those days with a fondness. It had changed, as all things do. Where there once was just a path worn by the tread of feet now there was a tar macadam path. Where there had been edges to look over in excitement now there were safety fences. All of the adventure had gone now it was just a nice footpath to be walked, or run. Every so often a little fingerpost to guide one on the way and the warning signs of steep banks and deep water.


Time moves on for all of us. Each day is another step on the onward journey. The ancients were fond of telling us that there were things that would only be learned from the process of ageing. That is true. Yet nobody ever wants to really acknowledge that we are growing older all the time, and the older we get the less we want to admit this. But let us reflect on what this for just a moment.

Rather than concentrating on the span of years let me give you this to consider. There are different levels of consciousness, depending on the age we have reached. What the teenager knows, (even though they often think they know everything) is just perfect for being a teenager. In fact those who try to stay as teenagers long after they have moved past that age can look so foolish. What the elderly does is perfect for the elderly, anyone else who mimics the elderly can be accused of being ageist, and look foolish. There are benefits for each age and each level of consciousness. It would be good though if there was more respect between each age of this fact. There is nothing wrong with being in tune with ones age; it is the way of the Tao.

Now here is the important bit. None of this means that we cannot begin new things, things that others might have begun much earlier in life. There are people who begin running marathons when youth deficiency is beginning to raise its head. What must not be ignored is having started late there will not be much opportunity to represent your country at the Olympic Games. That come from the consciousness of the age, so they run to be the best they can.

Where so much of the adventure of life is being factored out for the artist each new project is one of adventure.

The painting above is the portrait of a man full of worldly wisdom.
Posted by Ralph at 08:03