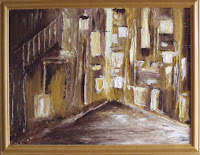 In recent years we have seen the growth in the large charity events, sport relief, children in need and numbers of celebrity events in aid of the growing number of charities. Now for those that benefit this must be a good thing. Who would ever question the motives of the celebrities, who get plenty of publicity? I often think that for the amount they raise after all the effort they could almost just slip that amount out of their wallet and never miss it. The fact that those in need benefit must never be objected to.


Religions have from time immemorial have tried to persuade their followers to be generous in giving to those less fortunate. There is the promise in most of these religions of future benefit beyond death. It is still a fact though that there is no promise of a special deal in the here and now. For most religions giving must be done in secret with no show of giving. It was wonderful to see artists giving artwork quietly to various groups to help those whose lives were so dramatically affected by the disaster in Haiti. Giving brings its own reward in exchange for our kindness there is a growth in the inner being.

When we begin to think of others besides ourselves there follows a growth in the person. It is wonderful to watch a young child for the very first time hand something it has to a parent. In this action is the first signs of growth of the human personality within, they are becoming aware of others. When a person for the first time begins to stop wanting to be loved and begins to do things for another without seeking any payback we can be sure that this person has began to learn what love really is.

So can we argue that it is from selflessness that growth can happen? When you see a pain in another person you recognise because you have felt that pain yourself then you can help. If you have felt the deep pain of loneliness it is possible to see that in others and you have the power to help.

Artists can be so guarded of the things they have learned that they want to hold on to them. How many times people have said to me don’t give step by step help to other artists unless somebody pays you to do so. There has to be a payback it would seem. Not so long ago I was asked by a fellow artist how I had achieved an effect in an abstract painting. I described it as fully as I could. Not long after I saw her exhibit a painting using this effect to its full, and better than I had myself. There was the payback for me; I saw that there was even more that could be done with this effect and new doors opened for me.

We all have our secrets and our places we want to hold onto for ourselves, and rightly so. But it is from giving that there comes knowing and from knowing comes growing. So open some of those secrets of experience and in secret share them with others, then you too will grow.

The painting attached to this blog is my most recent it is called:- Secrets.  ( The little secret places we have and the secrets of our minds)
Posted by Ralph at 08:08