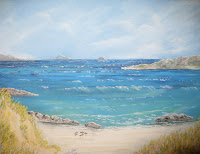 I was wondering when it was that I became aware of my love of empty places. I suppose there never really was a moment or time or place when I became aware. The truth was I had always been a bit like that from the beginning of my memories. I always liked, and needed, to be alone. I was thinking the other day there that if I had been born now and been as I was then somebody would have labelled me as having aspergers.

As my life moved on I more and more realised that if life was to have any meaning I had to play my part within it. So I compensated, I became the one with the self confident air. The centre of every conversation, the instigator and mover. The more I acted this out the more it became reality. I found myself surrounded with people instead of alone as I would rather have been.

I spent almost a complete year living on the small Island of Iona. This island lies off the coast of Mull and from it can be seen the Dutchmans Cap Island and the famous Staffa with its Fingals Cave. During the winter months the population of the island was in total about 80. In the summer its youth camp and abbey would increase this into the hundreds.

As I look back I am aware that this year was an important turning point. From this point on I was to be in both of my future careers, a leader and motivator. The shy person became the preacher, the loner became the teacher and friend of students.

As I grow older I again find myself withdrawing to the places of still and emptiness. The need to be at one with myself becomes more and more important. My walks and runs have become my solitudes. But I will never forget that day on the beach on Iona when I became aware that each of us in our own way is a part of this wonderful universe. That we each have a part to play, a contribution yet to make.

We who are in the business of creating art are very fortunate people. We can be alone and yet we can convey to others the beauty that is around them.

The poem about that moment on Iona is on my other blog. Before you go there I apologise for the clumsy words I just hope they express the inner feelings and the need to paint that Island as often as I have.   Iona
Posted by Ralph at 08:58