Nothing Wrong With My Eyesight. 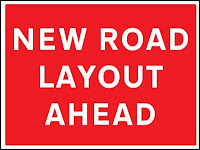 My wife has been complaining about her spectacles for ages now. Eventually she was persuaded to go to the optician and have her eyes tested but it had taken a good number of walks before she would eventually admit she needed to have her eyes seen to.

I wonder what it is about growing older that is the worst. The aches and pains that come with age? Or is it the loss of hearing? Or maybe it is the eyesight getting worse?

She had kept checking her eyesight against mine. As we walked towards a signpost she would ask me to tell her when I could read it without difficulty. I played the game for ages before the penny eventually dropped what she was in truth doing.

I heard four men chat yesterday each one proudly telling the others how good his hearing, eyesight or whatever was. As I listened to them I laughed at them and said to them that I had come to the conclusion that they were in such great condition they would have no problems as long as they all stuck together. Between them they had all the senses in good working order, separately they all had at least one that was failing. They all laughed.

I suggested we start a club and call it, “The helpful coffin dodgers.”

It reminded me of the story of the old lad who played golf most days of the week. One day he arrived home at lunchtime and said to his wife that he was playing no more. “I keep hitting the ball and it quickly gets out of my sight and I lose it.”

His wife thought for a bit and told him he should ask his brother Jack to go with him. She went on to explain the Jacks eyesight was perfect. He decided to do just that. The next day the two of them met at the golf course. Bill teed up his ball and hit a lovely drive. He turned to his brother and asked him if he saw where the ball went. “Of Course,” he said, “I have perfect eyesight.” “Ok”, said Bill, “Where did it go?” “Ah,” said Jack, “I saw where it went but I cannot remember.”

Do you know what the very worst thing about growing old is? Being afraid to admit that you are in fact doing just that.

This blog is linked to my other where I speak of my latest sale.Motion and Emotion.