Who Packs Your Parachute. 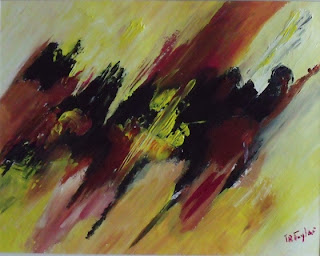 I had a strange and thought provoking moment yesterday, apart from the wonderful experience of throwing paint about. I was feeling good, having painted something I liked so I headed off to share it with my old pal Archie. Now when I think of it that was not the best thing to do, abstract art flies over his head, he much prefers paintings like the squirrel that he knows what they are.

Anyway, as we stood, I overheard somebody say, “What is he going on about running for; silly old git needs a stick to walk.” I could feel the hair at the back of my neck rise. I had to count to ten, before going over and quietly telling them that he had ever right to talk about running. I pointed out he was now in his eighties, and still walking everyday, even if it was with the aid of a stick. I also told them that he had once run ten miles to work and ten miles home every day. My last parting words were, “Think about that the next time you light up a cigarette, and ask yourself if you will.”

This incident reminded me of the story of the war fighter air pilot, Charles Plumb.

He was a US Naval jet pilot in Vietnam. After 75 combat missions, his plane was destroyed by a surface-to-air missile. Plumb ejected and parachuted into enemy lands. He was captured and spent 6 years in a communist Vietnamese prison. He survived the ordeal and now lives happily with his wife.

One day, when Plumb and his wife were sitting in a restaurant, a man at another table came up and said, "You're Plumb! You flew jet fighters in Vietnam from the aircraft carrier Kitty Hawk. You were shot down!"

"How in the world did you know that?" asked Plumb. "I packed your parachute," the man replied.

Plumb gasped in surprise and gratitude. The man pumped his hand and said, "I guess it worked!" Plumb assured him, "It sure did. If your chute hadn't worked, I wouldn't be here today."

Plumb couldn't sleep that night, thinking about that man. He still says, "I kept wondering what he might have looked like in a Navy uniform: A white hat, a bib in the back, and bell bottom trousers. I wonder how many times I might have seen him and not even said good morning,

how are you or anything because, you see, I was a fighter pilot, and he was just a sailor."

Plumb thought of the many hours the sailor had spent on a long wooden table in the bowels of the ship, carefully weaving the shrouds and folding the silks of each chute, holding in his hands each time the fate of someone he didn't know.

This story reminds me to remember each day that what ever it is I manage to accomplish it is because there are others in the background encouraging me and giving me support. Packing my parachute!

They are the ones who help me physically and emotionally as well as mentally, some of you are reading this blog right now. Thank you for packing my parachute. Now today ask yourself, who is packing yours?

The artwork here is discussed on my other blog:  Soaring Thoughts and Musical Moments
Posted by Ralph at 08:17