We All Need Something. 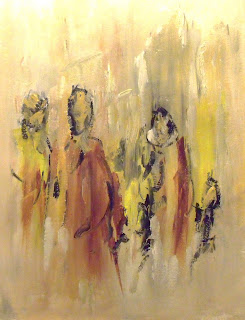 Like all towns and villages, where I live has its number of people who are out of work , out of homes and to be honest out of life. There are a number I know well and when I see them, if I can I will give them a little something. I do not ask if it will be used for soup or beer. I used to, until I decided that if I was homeless and jobless I would not want to be told what to do with the little bit of dignity I might have left. I have got to know some of these fellows and have heard some of what brought them to the point they are at and I have no right to judge them.

I was walking along the main street with a painting under my arm. A painting I had hung, had sold, and I was about to collect the payment and hang another of my works. I was feeling good, in fact sad to say I was feeling rather proud. Right in front of the place I was going there is a park bench. On this day there sat a man who could be decribed as a tramp, very easily. His clothes were shabby, his hair was unkempt and his beard looked as if it could do with a clean and trim. I did notice he was neither smoking or drinking, as most of the homeless I know do.

As I approached i was ready for the begging words. “Could you spare some loose change?” or words to that effect. I have to be honest and admit that it fleeting crossed my mind to try and avoid making eye contact with him. I did not know him and he did not know me, so no need for me to acknowledge his presence.

As I approached I waited, but it never came. I was wearing my painting top and the picture under my arm was obvious. As I drew near he spoke. At first I wondered what his line was going to be. He spoke about the abstract I was carrying, it seemed he liked abstract art. We spoke about the painting and some others he had liked. All the time I was waiting for his request, but it never came. I was about to leave and found myself asking, “Do you need any help?”.

His reply caught me off guard completely, “Dont we all mate, dont we all.”

I was feeling high and mighty, successful and important, above atramp

in the street, until those three words hit me like a sledge hammer.

I needed help. Maybe not for bus fare or a place to sleep, but I

needed help. I reached into my pocket and gave him a portion of the money I was about to collect. I was not sure what he would spend it on and it mattered not.

Even if it's just a compliment, you can give that. You never know when you may see someone that appears to have it all.

They just might be waiting on you to give them what they don't have. A different perspective on life, a glimpse at something beautiful, a respite from daily chaos, that only you through a torn world can see.

Maybe the man was just a homeless stranger wanderingth streets.

Maybe, just maybe, he was a bit more than that.

This blog is linked to my other. Dont Look Back
Posted by Ralph at 08:41