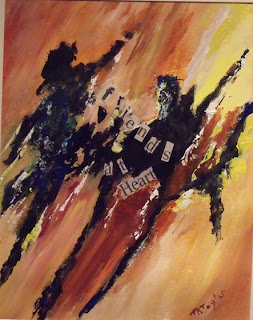 I was remembering some of the events in life that made me laugh the simple little things that meant much to me and something else to others. One such incident was when my son began to learn reading and writing. The first word he learned was the word, “Look”. This word began appearing on every bit of spare paper. Then one Sunday morning I arrived home from conducting an early morning service at the prison. As I drove up the drive towards the church there on the front of the wall in large very visible letters were two words, emblazoned in chalk, “Look, God.”

He had been at it again, showing off his writing skills. Some of the members of the congregation were more concerned about how the words were to be removed than thinking about what my son was maybe trying to tell them. I acted all serious but inwardly I had to smile.

Some weeks later my study was being decorated. New wallpaper was being hung to brighten the place up. When I arrived home from some visits I was met at the door by my daughter. “Dad you are not going to like what Ross has done now.” When I asked what he had been up to she informed me he had written on the study wallpaper. No, I was not going to like what he had done now. In anger I stormed up the stairs to the study. I opened the door. True enough the walls were written on in crayon. The words read, “I love my dad.”

The words were still there on the wall when I left that church to move to another parish. Every time I sat down to prepare for a meeting or to prepare myself for conducting Sunday worship I saw them. They were words that touched my inner being like few words could.

It is wonderful when somebody whom you hold dear takes the time to let you know that you also hold a special place in their life.

I often wonder if I do it often enough.

This blog is linked to my other. Friends At Heart
Posted by Ralph at 08:04