The Man With No Ears. 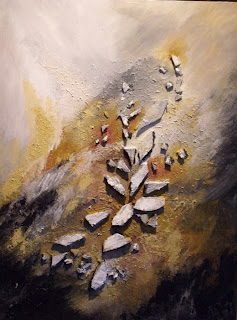 I have been overwhelmed as ever with the support and kind words of fellow bloggers, words I do not deserve. To put some minds at rest I think I have solved the problem I was facing in how to respond to the person who let us down so badly.

I will say no more about the matter other than to share with you a lovely story that I do not think I have told you before. I have twice had the joy of meeting new members to my family. The birth of my daughter and my son. Neither of them were born to perfection. My daughter was inflicted with my bent little fingers. When I was a young boy they wanted to break them and reset them but I still have them to this day and they have not got in my way. My son was born with a birthmark that early in his life resulted in the loss of an eye. Both of them in their imperfections are the absolute joy and love of my life. To me they are all that any father could ever ask for.

So to the story.

"Can I see my baby?" the happy new mother asked. When the bundle was nestled in her arms and she moved the fold of cloth to look upon his tiny face, she gasped. The baby had been born without ears. Time proved that the baby's hearing was perfect. It was only his appearance that was marred.

When he rushed home from school one day and flung himself into his mother's arms, she sighed, knowing that his life was to be a succession of heartbreaks.

He grew up, handsome for his misfortune. He developed a gift, a talent for literature and music. "But you might mingle with other young people," his mother reproved him, but felt a kindness in her heart.

The boy's father had a session with the family physician. Could nothing be done? "I believe I could graft on a pair of outer ears, if they could be procured," the doctor decided.

Whereupon the search began for a person who would make such a sacrifice for a young man. Two years went by.

Then, "You are going to the hospital, Son. Mother and I have someone who will donate the ears you need. But it's a secret," said the father. The operation was a brilliant success, and a new person emerged. His talents blossomed into genius, and school and college became a series of triumphs. Later he married and entered the diplomatic service. "But I must know!" He urged his father, "Who gave so much for me? I

could never do enough for him." "I do not believe you could," said the father, "but the agreement was that you are not to know, not yet."

The years kept their profound secret, but the day did come ... one of the darkest days that a son must endure. He stood with his father over his mother's casket. Slowly, tenderly, the father stretched forth a hand and raised the thick, reddish-brown hair to reveal that the mother had no outer ears.

"Mother said she was glad she never let her hair be cut," he whispered gently, "and nobody ever thought Mother less beautiful, did they?"

This blog is linked to my other. My Paintings Seem To Be Like Buses
Posted by Ralph at 09:12