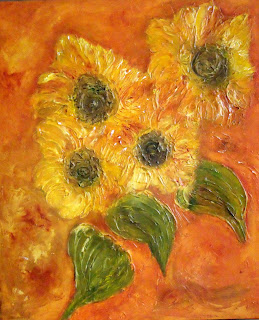 It has indeed been a very memorable week. It started just like the ones before until I ran on Monday morning. I managed to knock minutes off my fastest time for that particular run, and something even then told me it was going to be a good week. In the course of the week I knocked a further three minutes of that distance. I also managed to paint two paintings that I felt fairly happy with, and there is still today. Who knows I just might manage another one today.

I also managed to sell four paintings in the course of the week, three that I had almost given up on ever selling.

But more importantly last week had ended with some of my fellow bloggers emailing me. Those emails lifted my spirits no end. Made me look again at the last blog I had written only to find a whole host of messages had been left for me.

It is no wonder that sitting here today admitting I am a year older I am still feeling very good about life. Remind me of the story of the man who was shipwrecked and all alone on a small island.

Every day he scanned the horizon for help, but none seemed forthcoming. Exhausted, he eventually managed to build a little hut out of driftwood to protect him from the elements, and to store his few possessions. But then one day, after scavenging for food, he arrived home to find his little hut in flames, the smoke rolling up to the sky. The worst had happened; everything was lost, even his one or two personal items that had become so important to him, were gone.

He was stung with grief and anger. "Why oh why is this happening to me?" he cried. He had what I call a bout of the, “poor me’s.”

Early the next day, however, he was awakened by the sound of a ship that was approaching the island. It had come to rescue him. "How did you know I was here?" asked the weary man of his rescuers. "We saw your smoke signal," they replied.

It is easy to get discouraged when things are going bad. But we shouldn't lose heart, because with the help of friends the truth is, it can only get better when you are down.

Remember next time your little hut is burning to the ground- - it just may be a smoke signal that summons the love of friends.

Today will be a great day, even if I paint nothing but bin fodder.

I have added one of the paintings that sold to this blog and will show it and the other three on my other blog.   Four Sales