I Am The Invisible Man. 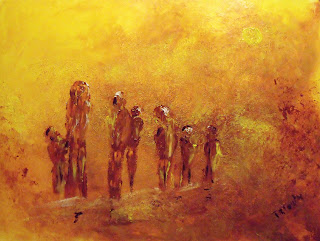 I remember when I was a young lad how I looked to my father as a super hero. I remember the Saturday evenings when he took to the cinema. On the way home he would race me, from the cinema all the way home. Seemed like a mighty long way at the time, I now know it was about a mile and a half. I was probably about 7 or 8 which would make my father about 47 or 48. I cannot ever remember beating him home. Every time I would think this time I will make it, then just at the last minute he would sweep past me. He was a very fit and very proud man and I thought he was a wonder. He was in fact a fairly ordinary man, who painted navel boats in the dockyard.

Some years later when we were out walking together, I challenged him to lift a log. I managed it, he struggled, age was beginning to take its toll. The years of hard work were showing on him. A few days later I saw him in the back garden of our home lifting weights, determined not to give in. He worked till he was 70 years old then had a stroke and could no longer talk or walk without difficulty. It was sad to see.

So why am I telling you this? Well I am more aware of what was happening to him as I become the invisible man. It started some time ago, my becoming invisible. I would go into shops and the young assistant would notice the young people and serve them before me as I was not there. My having a damaged voice also means that in company it is very easy to become the invisible guest. Yesterday I was at a ruby wedding celebration, music playing loads of people chatting and I felt like the invisible man. When you cannot speak above the noise it is easy to be ignored and invisible.

I think had I not taken up painting and began to get noticed around the place as the artist, I might have gone the way of so many, slipped into oblivion. The invisible man.

Now before I become too emotional or depressive let me tell you what made me think about this. I was looking at the bride of 40years and then I saw her daughter and then her sons. In them I could see that she had been quietly building a beautiful future and contribution to tomorrow. I thought of the year I has spent working on the building of the beautiful Abbey of Iona. Like many others I played my part and years from now it will still be there. I will, like many others, not be listed among the builders but I my little part will be in there playing its part in the wonder.

I also hope that just some of the things I hold important will live on in my family, that I have been quietly building and nourishing. Maybe also, just maybe, one of my paintings will last and make me less invisible.

We are surrounded by invisible people and today I am off to unmask a few. I bet I will learn from their wisdom.

This blog is linked to my other    The sands Of Time Move Ever Onward
Posted by Ralph at 08:01