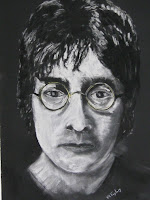 I wonder how often I have listened to conversations where people discuss what they would do if they won a great sum of money. Yesterday I went for a haircut, not something high on my list of priorities. My hairdresser is a lovely chatty girl expecting her first child. So full of enthusiasm she makes what could be a bad experience bearable. We were talking about holidays and the summer. She told me that this year with the coming of the new family there would be no holiday for her, unless she won the lottery.

It made me think back to when I was young and from a very poor home. How often I had dreamt of wealth. Being able to buy whatever I wanted. For a time I almost made it, playing music being self employed I was richer in terms of wealth than most of my friends.

Then I became a minister, not one of the best paid professions. I saw poverty and wealth, both extremes. I saw sadness and happiness. I saw illness and death and I saw joy beyond belief.

I also learned that there are things in life more valuable than wealth in terms of monetary wealth. The following story is just one small insight into what is a great big question of the haves and have nots. It is just something to ponder.

One day, a father of a very wealthy family took his son on a trip to the country with the firm purpose of showing his son how poor people live. He wanted his son to appreciate what he had given him. They spent a couple of days and nights on the farm of what would be considered a very poor family. On their return from their trip, the father asked his son, “How was the trip?”

“Did you see how poor people live?” the father asked.

“So, tell me, what did you learn from the trip?” asked the father.

The boy’s father was speechless.

Then his son added, “Thanks, Dad, for showing me how poor we are.”

I should tell you that yesterday I was listening to some old Beatles songs. I really like the one, Money can’t buy you love.