The Farmer and the Minister 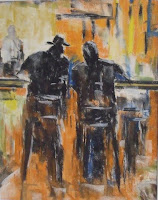 After leaving university at the end of my divinity degree I had to do some time as an assistant. When it was known that there was an assistant in the Presbytery area other ministers would call on your services to allow them to have a Sunday away. This often meant travelling a distance to small country churches. Some of these churches would have fairly small congregations at the best of times, even smaller when they were aware it was not their own minister.


I remember one Sunday getting lost going round country roads looking for the church I was due to preach in at 10am. Eventually I found it but only after parking the car and trudging across a muddy field. I conducted the service to a small gathering then made my way back over the field. I was then expected at another church where I had to go through the whole service a second time.

At the end of the day I had muddy shoes and trousers, had preached the same sermon twice, to possible a total of twenty-five people. I remember asking if it was worth the time and effort.

I remember later retelling this story to an old farmer who told me the following tale.

An old hill farming crofter trudges several miles through freezing snow to his local and very remote chapel for Sunday service. No-one else is there, except the minister.

"I'm not sure it's worth proceeding with the service – would we not do better going back to our warm homes and a hot drink?" said the minister, inviting a mutually helpful reaction from his audience of one.

"Well, I'm just a simple farmer," says the old crofter, "But when I go to feed my herd, and if only one beast turns up, I sure don't leave it hungry."

So the clergyman, feeling somewhat ashamed, delivers his service - all the bells and whistles, hymns and readings, lasting a good couple of hours - finishing proudly with the fresh observation that no matter how small the need, our duty remains. And he thanks the old farmer for the lesson he has learned.

"Was that okay?" asks the clergyman, as the two set off home.

"Well I'm just a simple farmer," says the old crofter, "But when I go to feed my herd, and if only one beast turns up, I sure don't force it to eat what I brought for the whole herd."


Yesterday I had a conversation with somebody I had never spoken to before. I had seen him around and had asked friends  who he was. Most people knew his name but nobody ever seemed to speak with him. I found him a fasinating character full of wit and wisdom, and I left glad I had taken the time to sit in his company and share some time with him.

Sometimes gems are found in the least expected places.