A Touch of the Poor Me 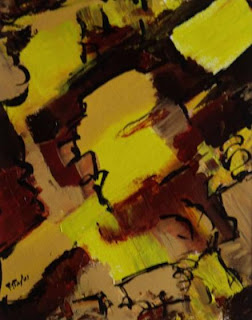 How easy it is to suffer from the poor me.  Right now I am fighting very hard not to do so. But before I begin I need to explain something about yesterdays story. The character Barry was a very real person,and many people treated him like that. I remember him well.
Today I am going to keep this short because sitting here for long periods is not at all easy. Yesterday while out running in the rain and the gale force winds I had a difference of opinion with a car and it won. While trying to avoid a place in the road that was flooded a car sped round the bend under the bridge where I was. The next thing I knew I was lying in the road and the car was still speeding off. Today I can hardly move, so no walking today, never mind running.
This reminds me of the story of the frogs.
A group of frogs were travelling through the woods, and two of them  fell into a deep pit. When the other frogs saw how deep the pit  was, they told the two frogs that they were as good as dead. The  two frogs ignored the comments and tried to jump up out of the pit  with all their might. The other frogs kept telling them to stop,  that they were as good as dead. Finally, one of the frogs took  heed to what the other frogs were saying and gave up. He fell down  and died.
The other frog continued to jump as hard as he could.
Once again,  the crowd of frogs yelled at him to stop the pain and just die. He  jumped even harder and finally made it out. When he got out, the  other frogs said, "Did you not hear us?" The frog explained to  them that he was deaf. He thought they were encouraging him the  entire time.
This story reminds me of two important lessons:
1. There is power of life and death in the tongue. An encouraging  word to someone who is down can lift them up and help them make it  through the day.
2. A destructive word to someone who is down can be what it takes  to kill them.
Be careful of what you say. We have to be careful what we say. Speak life to those who cross our path.
The power of words... it is sometimes hard to understand  that an encouraging word can go such a long way. Anyone can speak  words that tend to rob another of the spirit to continue in  difficult times.
Special is the individual who will take the time  to encourage another.
I apologise to anybody I have ever hurt by saying something that was thoughtless.
This blog is linked to my other.   Autumn Will Come
Posted by Ralph at 08:54