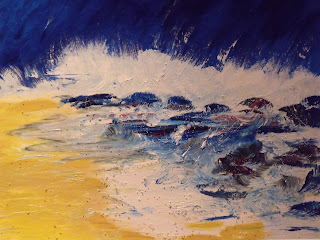 I am today just going to share a story with you. I have my reasons for sharing this story and so I am telling this one again as much for myself as anybody else.

It is the story of an old man. His wife, who he had loved for many many years, had died and he was left on his own. It soon became obvious to his daughter and son in law that he was really not managing on his own.

They decided that they should come and stay with them. They made one of the rooms in their house into a little living area for him and moved his own bed in there also.

Each evening they would all gather round the family table for evening meal. He so loved his two grandchildren and loved to hear about what they had been doing during the day. The laughed and joked, everything seemed to be going well.

As he got older his hands began to shake. He would drop food off his fork onto the floor and table. He would spill his drink. His daughter at first was happy to clean up for him but more and more she got upset by it. She began to get angry with him and no more looked forward to evening meal.

One day she decided she had put up with it long enough. She bought him a wooden bowl and a spoon and began to give him his meal alone away from the table. Once he was finished she would clean up and then the family had their meal, he went off to his room.

One day the grandson was sitting playing with some play dough. His mother asked him what he was doing. He told her he was making a bowl for her so that when he was old, and she was old, he would have a special bowl just for her.

She stood and looked and felt the tears run down her face. She realised just what she had been doing. She felt terrible.

That evening her father was back at the table with the family. It did not seem to matter that he spilled food or drink. She loved him and he had loved her and cared for her when she spilled food.

Sometimes we do things without thinking or seeing the effect they will have on others.

Whoever it was that first spoke the words of the, “Golden Rule,” got it so right. It can be found in three forms from the ancient writings but what it says is simple. Treat others as you would want them to treat you.

This blog is linked to my other. Abstract in Blue
Posted by Ralph at 08:35