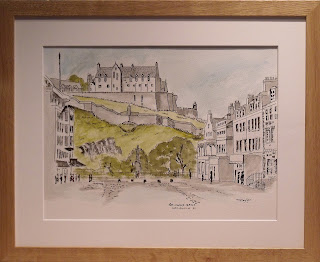 The New Year is a time of reflection in so many ways. I found myself thinking of all the old traditions that surrounded New Year in my youth.  How the fireplace had to be cleaned spotless and a new fire laid and made ready to be set alight just after midnight.

Then off we set to visit the neighbours in their homes. We took with us a bottle of whiskey to offer the neighbours a toast, a lump of coal to bring them warmth and a piece of shortbread to symbolise the desire that they ate well in the coming year.

Every year we made new year resolutions, promising to do so many things, of which most were forgotten before January came to an end.

When I became a minister of religion I re-established some traditions that had slipped away. I rang the church bells at midnight.  After the service, which finished just after midnight I invited so many people over to the manse they could hardly all get in.

Now, it comes and goes. No longer to I make resolutions other than to continue as I have been in the year just gone. I hope that my year has been fruitful to others as much as to myself, so why promise to make any changes.

I do like to make a real effort to apologise to anybody I have hurt in any way whatsoever during the year now gone. I do so even now in this blog to anybody I may have offended and not yet been aware and apologised.

All the thinking and promises in the world are meaningless unless they are truly meant.

The old wise sage was talking with his disciples one day.

"Of what use are your learning and your devotions?
Does a donkey become wise through living in a library or a mouse acquire holiness from living in a church?"
"What is it, then, we need?" asked one disciple.
"A heart."
"How does one get that?"
The Master would not say. What could he say that they wouldn't turn into a subject to be learned or an object of devotion?

Another year in which to get on a do the things we artists do. With all our heart aspire to make people enjoy what they see, touch and feel.

This blog is linked to my other. Edinburgh Castle From George Street.
Posted by Ralph at 11:50