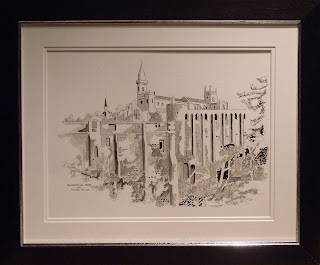 Most people know that on leaving school I started work as a butcher. Not something I made a concrete decision to do, rather something I drifted into. More a reaction against what my family had planned for me than my own decision. Where I lived most young boys sat the entrance examination to get a job, a trade, in the navel dockyard close by.

The last thing I had ever wanted was to work in a navel dockyard so I made sure I had a job ready to go to before I was ready to leave school. As the new start I got all the most terrible jobs to do, but I was aware that this was not personal, just the way things were.

Some of the jobs were just downright boring and tedious. One of the most boring of all was the knife sharpening day.  Once a week all the knives were taken to the back yard where there was a sharpening stone. It was my job to keep the wheel turning while the older butcher did the honing of the blade. Each blade took a fair amount of time to get right. At the end of the exercise my arms used to ache for all of the next day.

I suppose, looking back now, it was this that led me to realise that I could not go on like this for the rest of my working life. So the studying I had never got round to at school began in my spare time. I was determined to make something more of my life.

All seems so obvious now, but had not been when I was living the reality. Sometimes the obvious stares us in the face but we keep banging our heads against the wall trying to find the obvious.

Reminds me of the tale of the woodcutter.

Once upon a time a very strong woodcutter ask for a job in a timber merchant, and he got it. The paid was really good and so were the work conditions. For that reason, the woodcutter was determined to do his best.
His boss gave him an axe and showed him the area where he was supposed to work.
The first day, the woodcutter brought 18 trees
"Congratulations," the boss said. "Go on that way!"
Very motivated for the boss’ words, the woodcutter try harder the next day, but he only could bring 15 trees. The third day he try even harder, but he only could bring 10 trees.Day after day he was bringing less and less trees.
"I must be losing my strength", the woodcutter thought. He went to the boss and apologized, saying that he could not understand what was going on.
"When was the last time you sharpened your axe?" the boss asked.
"Sharpen? I had no time to sharpen my axe. I have been very busy trying to cut trees..."