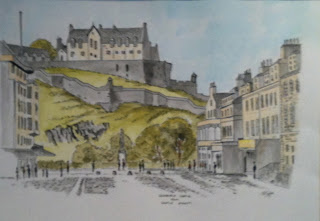 The disciples were absorbed in a discussion of Lao-Tzu's dictum:
"Those who know do not say; Those who say do not know."

When the Master entered, they asked him exactly what the words meant.
Said the Master, "Which of you knows the fragrance of a rose?"
All of them knew.
Then he said, "Put it into w rather cutting remarks ords."
All of them were silent.
As an artist we frequently attempt to to something very similar to what Lao-Tzu was asking his disciples to do. We attempt to describe the emotion that a certain scene arouses in the inner depths of a person. To convey that which cannot be conveyed with words.
Often, when in front of a work of art produced by another we feel moved. At moments like this I often ask myself if the emotion I am feeling is the same as the artist had when he or she sat before the blank canvas or piece of paper.
While visiting the art gallery the other day, I watched a number of young artist sit before some works of art with pen and pencil and making their attempts at reproducing the painting or an aspect of this.
I heard two people discuss what they were seeing. They were making rather cutting remarks about copying and having no artistic value.

I used to feel a bit like that myself when I watched other artists copy the work of another, or follow a step by step lesson.
I remember the first time somebody copied one of my abstracts from my website. My first reaction was to scream and make a great deal of noise. Then I stopped and thought. I must have managed to convey something in that painting, that another would wish to make there attempt at producing their version of it.
No one is the supreme authority of how we interpret a certain aspect of life. Nobody has all the answers of how we live our lives. Nobody can know us like we know ourselves. All that we can each gain from a wise person is some initial assurance and some guidance along the way.
If somebody sees some worth in something I have produced, and makes there own attempt and expressing it in their way I am honoured I have given them this initial step along the way.
This is why I have never made it impossible for anybody to take copies of my work from my website.
When I see something very similar to something I have produced before I make no comment if the comment I feel like making would be a negative one.
Yes I am aware that there are laws of copyright, I do have a son who is a lawyer, and I was a magistrate for a long number of years.
But if art is not about helping others to express that which cannot be expressed in words. If art is not about helping others feel that inner joy. I ask, “What then is art.”
Or as Lao-Tzu said much better than I.
"Those who know do not say; Those who say do not know."

My I thank those people who have come along to my blog for the first time and made comment on it. It always means much that people take the time.

The artwork above is another version of my Edinburgh Castle but on this version I have added some more colour. AS I continue with this medium my desire to add colour keeps pulling at my inner strings.
Posted by Ralph at 10:52